Taxpayers are out an estimated $45 million a year because the former Tory regime balked at enacting a law that would have meant most of the fees paid by oil and gas companies for access to public lands went into government coffers instead of private pockets, according to a new study.

The report by the Alberta Land Institute found that about half the money the province has been forgoing by not proclaiming a 1999 bill, which would have limited so-called “cowboy welfare” or surface rights payments by the energy industry, is going instead to a tiny minority of those who hold grazing leases.

“The top two per cent of leases collect as much as 50 per cent of the total compensation paid to leaseholders,” the study said.

“The government of Alberta will have to determine if the magnitude of the revenue involved would be worthwhile to invest in other programs.”

Cliff Wallis, spokesman for the Alberta Wilderness Association, said he was shocked at the report’s finding.

“You might call them fat cats sucking on the public teat,” Wallis said.

“It points to the need for much greater transparency so the public can determine if windfall profits are being made by some ranchers on what are public lands.”

Larry Sears, chairman of Alberta Grazing Leaseholders Association, said the government shouldn’t be looking at new regulations to govern a few outliers who get large payments.

“The vast majority of the 7,300 leaseholders have five or fewer installations,” Sears said.

“If the government needs additional revenue, they should look at mineral lease payments and production royalties, not the negotiated compensation for the noise, dust, gates left open, nuisance and general loss of use that is due leaseholders.”

The New Democrat government said last summer it would conduct a thorough review of the grazing lease system in the wake of a scathing report from the province’s financial watchdog that found the public purse was being shortchanged.

Environment Minister Shannon Phillips was non-committal about the latest report, saying only that its findings would be useful as her department moves forward in discussions with stakeholders on possible changes.

Compensation rates for well sites on leased Crown land are privately negotiated between ranchers and energy companies, but the study used an annual fee of $1,500 as an estimate based on recent decisions by the surface rights arbitrator to arrive at its $45 million figure in foregone disturbance payments.

Under the 1999 legislation that the province never proclaimed, ranchers would have gotten $300 for the first three sites on any lease, less as the number of wells on the land parcel increased, with the total payment capped at a maximum of $5,000.

The rules provided that the well operator would also pay the government approximately $750 for every hectare of land used for wells and service roads.

The report by the independently funded institute at the University of Alberta warns of financial and political risks to tinkering with the current rules.

Co-author Vic Adamowicz said the government needs to determine first if the rental rates being charged by the province to rent leaseholders is fair and whether the disturbance payments that are ultimately arbitrated by the Surface Rights Board accurately reflect the lost use and damages suffered by ranchers.

“If we start messing around with one leg of the stool, it’s going to start wobbling,” Adamowicz said. 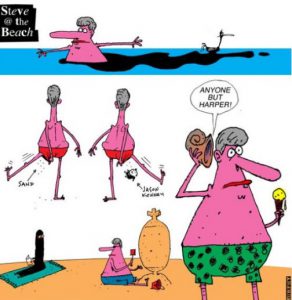 I guess in Alberta oil drilling/fracking must qualify as “ranching use”.