AER and Gerard Protti trying to erase the murders in the Frac Hell Free-for-all they created and enable at Fox Creek? How will the AER restore those lives? How will they wipe out the horror facing residents and workers?

The Alberta Energy Regulator has shut or partially shut [Is this a media stunt to deflect from the Fox Creek Blanket Approval Work Camp murders? How do you partially shut an oil well? Allow 99% of production to flow and profits to rake in?] 16 oil wells operated by Murphy Oil Company Ltd. for failing to comply with various rules.

The regulator said that after conducting a compliance sweep of 71 sites in the Peace River it found wells operated by Murphy Oil that didn’t meet the requirements to capture and flare, incinerate, or conserve all casing gas and tank-top gases.

In response, the regulator has shut in or partially shut in the wells [What does this mean?  Are the wells shut in or not?  Just another pretend AER exercise to deflect and distract from the double homicide horrors in Fox Creek’s Blanket Approval, No Duty of Care Experiment created by Protti and his law-violating, rights-violating AER?], where a partial shut-in involves shutting only the non-compliant piece of equipment without shutting down the whole site. [Sweet!  So Murphy can install a replacement piece of equipment, and keep on profit-taking while greedily poisoning families and community?

This punishment sounds like taking the car keys away from a misbehaving teenager, but letting them have the spare set.

Why not shut in all of Murphy’s wells, completely? Then, perhaps, the new NDP government, public, courts, Murphy and other endlessly non-compliant companies like Encana, and citizens around the world watching the “Alberta Model” debacle unfold, might start taking the AER seriously, and healing and forgiveness begin. ]

After finding some wells not in compliance, the energy regulator also instructed Murphy Oil to inspect its remaining sites [The AER lost whatever points it was trying to collect], leading to the company shutting [partially?] an additional 17 sites that were non-compliant.

The energy regulator is investigating the issue and the Murphy Oil sites will remain shut or partially shut until a plan to achieve compliance is approved by the regulator.

[The AER is letting Murphy investigate its non-compliances, keep raking in money off Albertans while it investigates itself and creates a plan to keep operating in noncompliance?

Absolutely “best in the world” regulator – for those violating the law.] Source of image:  FrackingCanada The Last Road to Redemption

Murphy Oil Co wells shut in for venting gasses improperly by Geoffrey Morgan, July 3, 2015, Financial Post
Alberta regulators have inspected 834 wells in the Peace River area in six different sweeps over the past year. [And Murphy’s the only one to be “partially” shut in with glorious AER press release to go with it? Something stinks at the AER worse than the toxic Baytex emissions that drove families permanently from their homes.]

CALGARY – Murphy Oil Co. has shut in 33 of its heavy oil wells in northern Alberta after a regulatory sweep found the company was not capturing gasses from those wells properly.

The Alberta Energy Regulator is now conducting an investigation into the Arkansas-based company’s non-compliance. In a statement released Friday, the provincial regulator said “all sites will remain shut-in or partially shut-in” until the AER approves Murphy Oil’s plan to correct the problem.

Murphy Oil did not respond to requests for comment Friday afternoon [Too busy suds-ing it up at the Stampede with Jim Ellis and Gerard Protti?]. The sweep of its heavy oil wells in Alberta’s Peace River region included 71 sites. The AER found 16 of those wells were non compliant. The company shut in, or partially shut in, another 17 wells that were venting gas.

In the past year, the regulator has inspected 834 wells in the Peace River area in six separate sweeps. The actions taken Friday reflect the higher number of non-compliant wells in a single sweep to date, including a June 2014 sweep that covered 355 wells.

“The AER is committed to continued action in Peace River and ensuring all our requirements are met,” AER president and CEO Jim Ellis said in a release. “When they are not, we will take enforcement action as we have demonstrated with these recent compliance sweeps.”

DMM • 2 hours ago
How about….if you don’t follow the rules, you surrender 100% of the profits you made by shirking your duty. Keep the punishment simple and EXPENSIVE. They will clue in fast. 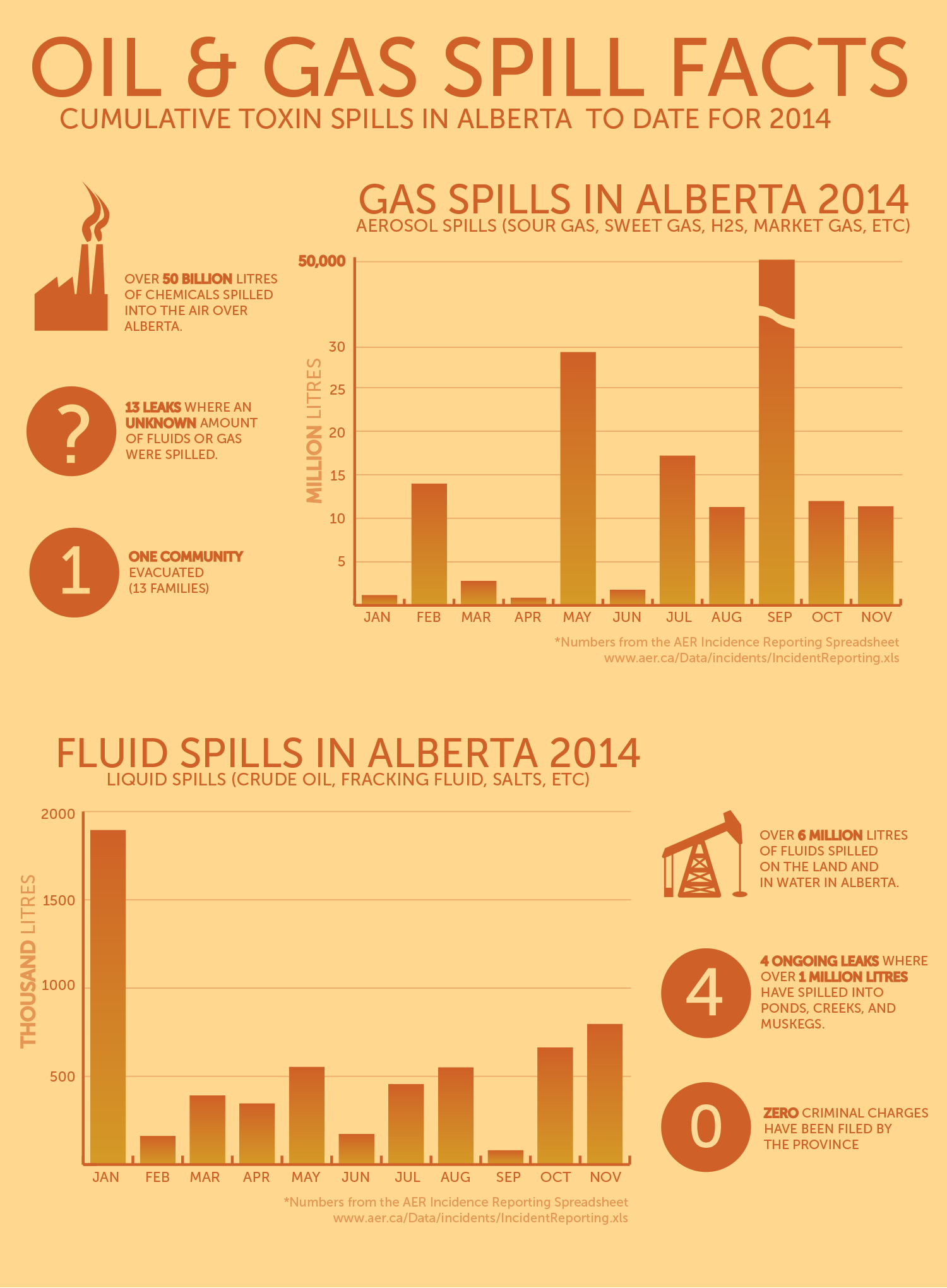 Alberta Energy Regulator Shuts in Wells Following Compliance Sweeps in the Peace River Area Press Release by AER [Stunt? Why do a press release for “partially” doing what is supposed to be your job?], July 3, 2015, Market Wired

Alberta Energy Regulator (AER) inspection teams conducted a compliance sweep of 71 sites in the Peace River area from June 15 to 19, 2015, and shut in sites not meeting requirements.

The AER found 16 sites, all operated by Murphy Oil Company Ltd. [Did AER and Murphy make a deal?], to be noncompliant with requirements to capture and flare, incinerate, or conserve all casing gas and tank-top gases in accordance with their schedule, submitted to and approved by the AER. As a result, they were shut in or partially shut in. A partial shut-in involves shutting in the piece of equipment that is in noncompliance without shutting down the entire site.

The AER directed Murphy to conduct inspections on remaining sites. The company shut in or partially shut in an additional 17 sites that were venting casing or tank-top gas.
“Albertans expect the AER to protect public safety and the environment and to make sure operators follow the rules,” said AER president and CEO Jim Ellis. “The AER is committed to continued action in Peace River and ensuring all our requirements are met. When they are not, we will take enforcement action as we have demonstrated with these recent compliance sweeps.” [Make Murphy’s production data public before expecting the public to believe Ellis or the AER that this is a real sweep and not a media stunt]

The AER is conducting an investigation into the noncompliances. All sites will remain shut in or partially shut in until the AER approves the operator’s action plan to achieve compliance. Information about the investigation and noncompliances can be found on the AER’s compliance dashboard.

Based on recommendations found in the Report of Recommendations on Odours and Emissions in the Peace River Area, operators in the Seal Lake and Walrus areas submitted operating plans to the AER in June 2014 that included an implementation schedule to capture tank-top gases as part of an ongoing effort to improve air quality in the Peace River area.

The AER has conducted six sets of targeted compliance sweeps since June 2014, inspecting 834 sites in the Peace River area. These sweeps supplement the AER’s regular inspections. Results of the compliance sweeps are available at www.aer.ca.

The AER ensures the safe, efficient, orderly, and environmentally responsible development of hydrocarbon resources over their entire life cycle. This includes allocating and conserving water resources, managing public lands, and protecting the environment while providing economic benefits for all Albertans.

FOR BROADCAST USE:
The Alberta Energy Regulator has found 16 sites operated by Murphy Oil Company Ltd. to be noncompliant with requirements to capture and conserve gases in the Peace River area. The AER is conducting an investigation into the noncompliances, and all sites will remain shut in or partially shut in until the AER approves the operator’s action plan to achieve compliance.
Contacts:
Melanie Veriotes, AER Public Affairs
Phone: 403-297-6986
E-mail: email hidden; JavaScript is required
Media line: 1-855-474-6356

[REALITY OF THE FREE MARKET IN ALBERTA:

In 2013, after Ernst paid Market Wired (AER used Market Wired for their Media Stunt above) $6,000.00 for one press release, her lawyers were told by phone and email that Ernst is no longer allowed to pay for Market Wired’s services, except if she resolves her case or is no longer an individual:

Please see below as discussed.

2014 10 08: Baytex Finally Successful, Gags & Settles Poisoned Alberta Families: Does a lawyer-touted “positive outcome” of displacing and gagging poisoned families, stop the poisoning? BY THE AER’S MEDIA STUNT ABOVE, APPARENTLY NOT. “Our house is contaminated…there’s a smell now…Part of the torture of all this is not only abandoning our farm, but the health experts…told us we shouldn’t bring anything (with us).”

After Baytex gagged and settled with the families the company poisoned, long after the AER diddled and fiddled and diddled some more, refusing to “regulate,” the Stopbaytex website vanished.

Karla Labrecque’s doctor refused to do a blood test until he consults with a local politician; Mike Labrecque gets sick working for Baytex, Baytex lets him go: “You’re done.”