LOS ANGELES— Oil companies over the past year used more than 45 million pounds of dangerous chemicals in Los Angeles and Orange counties that have a history of escaping into the air and posing serious health risks to people, according to a new analysis. The data analysis examined “air toxic” chemicals used in selected oil and gas extraction methods monitored by the South Coast Air Quality Management District.

The analysis, conducted by four nonprofit health and environmental organizations, found that the oil industry has employed at least 44 different air toxic chemicals in hundreds of fracking, acidizing and gravel packing jobs in the two counties since June of 2013, when the air district began requiring well operators to disclose chemicals used in unconventional operations. [How many pounds of toxic chemicals were used each year before 2013?]

More than half these chemical-intensive events occurred in oil wells within 1,500 feet of a home, school, or medical facility. Neither federal nor state regulators have required oil and gas companies to limit toxic air pollution, even for wells in populated areas.

Hydrofluoric acid, methanol, crystalline silica and formaldehyde were the most frequently used air toxics — chemicals that can escape into the air and cause illness and death. Formaldehyde, for example, harms the eyes and respiratory system and is classified as a cancer-causing substance by the California Air Resources Board and the International Agency for Research on Cancer.

The new report — issued by the Center for Biological Diversity, Physicians for Social Responsibility – Los Angeles, Communities for a Better Environment, and the Center on Race, Poverty and the Environment — also found that oil companies have concealed the names of chemicals used 5,050 times by claiming the information is a “trade secret” despite state law requiring the full disclosure of those chemicals.

“Oil companies’ own records show they’re recklessly using thousands of tons of air toxic chemicals in some of California’s most heavily populated communities,” said the Center’s Hollin Kretzmann. “This is the air that 13 million people breathe every day. We need to stop this dangerous oil extraction immediately to protect the air we breathe.”

“We understand the terrible health impacts caused by the chemicals being used to extract oil in Los Angeles and Orange counties,” said Angela Johnson Meszaros, general counsel at Physicians for Social Responsibility-Los Angeles. “Given the massive volume of chemicals being used so close to where people live, work, and go to school, there is significant likelihood that people will be harmed by these chemicals. We routinely see reports of leaks, accidents, and injury associated with oil extraction.”

“Children, the elderly, and people who are already sick are especially at risk from exposures to air toxics,” said James Dahlgren, M.D., a Los Angeles-area physician. “Data collected over the years strongly supports the need for special attention to be paid to these populations because they tend to have reactions to chemicals at lower levels than the general adult population.”

The oil industry has reported 477 hydraulic fracturing, acidizing and gravel packing operations in Los Angeles and Orange counties over the past year, with acidization being the most commonly used technique.

“Residents, including many vulnerable members of our society like elders, the ill, children and even infants, who are exposed to the daily impacts of oil drilling as well as other forms of industrial pollution, rely on public health and environmental agencies to not only require that this information be made public, but to also monitor the emissions coming from these reported events,” said Yana Garcia, a staff attorney and environmental justice advocate with Communities for a Better Environment.

Today’s report provides further evidence of the need for a halt to well stimulation and drilling to protect air, water, and health in Los Angeles. On February 28, the L.A. City Council voted 10-0 in favor of this commonsense measure and directed the City Attorney to draft such an ordinance. [Emphasis added]

For the past year local air regulators have been tracking the chemicals companies use in oil and gas exploration around Southern California. In a report released Wednesday, four environmental groups crunched the tracking reports to find that more than 40 toxic chemicals have been used in dozens of drilling operations, often near homes, schools, and hospitals.

The South Coast Air Quality Management District has sought information about so-called “well stimulation” activities. This includes hydraulic fracturing or “fracking” and also processes known as “acidization” and “gravel packing.” The methods differ slightly, but all seek to inject material into fissures in the earth in order to extract hard-to-reach oil and gas.

The top chemicals used during the past year include crystalline silica, methanol, hydrofluoric acid, and formaldehyde.

Crystalline silica is a cement additive also known as “frac sand.” It’s used to hold open cracks in underground rock formation so that gas and oil can travel into the well. While crystalline silica is naturally-occurring, respiration of the fine sand can cause silicosis, an incurable lung disease.

Methanol is a volatile gas, with wide-ranging health effects from exposure.

“One of the interesting things about something like methanol is you can see immediate harms like burning of the eyes or stomach problems,” said Angela Johnson Meszaros, general counsel for the Physicians for Social Responsibility of Los Angeles. Her group was among those that surveyed AQMD tracking reports. “You can also see long term problems like problems with the nervous system, headaches and the like. And you can also see reproductive harm and harm in the next generation.”

The report also helps fill in a sometimes-sketchy picture of oil and gas production in southern California’s highly populated urban core, and reveals the extraction techniques preferred over the past year.

Just 14 of the drilling events reported by companies to the AQMD under this requirement were fracking. “There’s not a lot of fracking happening in southern California,” says Johnson Meszaros. “What’s really happening here is acidization.”

More than 300 of the events reported were acidization events, in which acid is mixed with other chemicals, water, and sand in order to create tunnels in rock through which oil and gas can flow. Hydrofluoric acid is used for this purpose.

AQMD spokesman Sam Atwood says regulators are gathering tracking data for up to two years as part of the initial phase of its disclosure rule. In the second phase, regulators then will be “evaluating if there are significant air impacts and if so proposing regulations to address those impacts.”

There are no indications at this point that any chemicals identified by the companies to the AQMD have exposed anyone to unhealthful levels of toxic substances.

In an e-mail, Colin Maynard with the Western States Petroleum Association said that oil and gas production has occurred in Southern California for close to a century. “That production takes place day in and day out in the most heavily regulated environment in the world, and it takes place without harm to the environment or communities,” he wrote. [Emphasis added]

Death by Corporation, Part IV: Dissolving the Planet for Oil by Dr. Brian Moench, September 13, 2013, Truthout News Analysis
One of the most iconic scenes in movie history occurs near the climax of
Raiders of the Lost Ark. A fictitious German army officer and Indiana
Jones’s archeological nemesis have captured Jones and his newly found
ark of the covenant. As Jones somehow knows to look the other way, his
nefarious but ignorant captors open the chest holding the ark. Demons
pour out and within seconds their exhilaration turns to horror as their
flesh hideously melts off their bones, and they die a spectacular death
by an unspecified supernatural acid.

There is a real-life counterpart to this Indiana Jones supernatural acid
– hydrofluoric acid, or HF. It’s not quite as depicted in Breaking Bad,
but through exposure of skin or eyes, or when inhaled or swallowed, HF
readily penetrates tissue, poisoning as it goes. Symptoms of exposure to
hydrofluoric acid may not be immediately evident, but because HF
interferes with nerve function it can wreak systemic havoc, resulting in
death. HF is likely still being used and stored by a refinery near you.

But just when you thought that the oil companies couldn’t possibly put
more poison into our air and water, do more damage to the earth, to our
climate, to our future and our hope for survival, along comes “matrix
acidizing,” the oil industry’s latest stroke of genius to extract oil
from shale formations by literally disintegrating underground rock
formations using – you guessed it, hydrofluoric acid.

During the summer of 1986, Amoco, Allied-Signal, Du Pont and Lawrence
Livermore National Laboratory voluntarily conducted a series of six
experiments involving atmospheric releases of HF in an attempt to
characterize its behavior. These studies, known as the “Goldfish
studies,” were conducted at the Department of Energy Liquefied Gaseous
Fuels Spill Test Facility in Nevada and showed that the HF did not
remain a liquid following accidental release. Instead, under the
conditions simulating a petroleum refinery explosion (HF above its
boiling point and liquefied under pressure), 100 percent of the released
liquid HF formed dense, rolling clouds of toxic vapor.

The clouds expanded rapidly, and researchers measured dangerous concentrations at distances of three to six miles downwind. A person caught in this cloud
would experience burning eyes, nose and throat. Soon their lungs would
become inflamed and overwhelmed with fluid, followed by acute
respiratory distress syndrome, ARDS, and most likely death within a few
hours.

But maybe I worry too much. Maybe the oil and gas industry can pump
millions of gallons of HF in wells underground all over America, fill
thousands of diesel trucks with it, have them drive all over our roads –
next to commuters who are texting on their cellphones – through rain,
ice and snow, not cut any corners, never go too fast or lose their
brakes. None of that HF will corrode any well cement or casings in the
next 50 years and seep into our water supply, will it? This will all
work out fine, right? [Emphasis added]

Convulsions and cardiac arrhythmias and death from cardiac or respiratory failure may occur in humans from ingestion of high doses of fluorides.

Damage to the lungs, liver, and kidneys has been observed in animals acutely exposed to hydrogen fluoride by inhalation.

Video clip by FrackingCanada Fracking Rocky View County: A company trying to burn off chemicals and waste gases after a frac job. 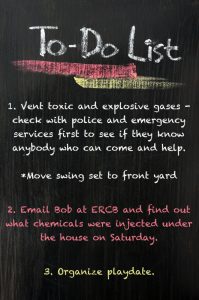 FrackingCanada: Into the Mouths of Babes

FrackingCanada: No Duty of Care

Slide from 2005 Encana presentation on frac and drilling fluids

2006: Encana chemicals stored on lease at Rosebud in the pouring rain Hydrofluoric Acid: What You Need to Know: Hydrofluoric acid has unique properties that make it extremely dangerous to emergency personnel and others