Another oil company, Rex Energy, bites the frac dust: After 7 years, Woodlands Pa residents still have no water. But some got cash to keep quiet. How cruel is that? As cruel as Encana giving money to some residents at Rosebud Alberta, but not others, and most disgusting, refusing to stop frac’ing into drinking water zones after the community’s water got frac’d.

After 7 years, these Pa. residents still have no water. But they got cash to keep quiet by Wallace McKelvey, Jul 19, 2018, pennlive

Seven years after the taps ran orange and black in the Woodlands, a hardscrabble community dappled with shale gas wells, the water is still undrinkable.

Some of its angriest residents, however, have fallen silent.

They aren’t dead, although some complained of mystery ailments. And they haven’t moved away.  Few of them have the means to do so.

Rex Energy, one month before filing for bankruptcy this May, settled a series of water contamination claims with eight households, comprised of 30 individuals, for $159,000. The settlements were kept secret because the people involved were bound by nondisclosure agreements, which have become standard in the natural gas industry and in the wider business world.

The only reason the Woodlands payouts became public was their inclusion in mandated spending reports Rex Energy filed as part of its Chapter 11 bankruptcy proceedings.

But the underlying contamination problem has yet to be resolved. For years, Rex Energy and the state Department of Environmental Protection denied any connection between local water quality problems and drilling activity.

“I really didn’t care to get the money,” said one resident, who spoke on the condition of anonymity out of fear of legal repercussions. “The attorney asked me, ‘What do you want out of it?’ I said, ‘My water back’.” [“ME TOO!” cries Ernst]

The resident, like many in the low-income Butler County community, continues to pick up a meager allotment of water from the nearby White Oak Springs Presbyterian Church. The congregation set up what it calls a “water bank” after water pumped from various private wells turned black, brown, orange, fizzy, oily and began emitting the smell of rotten eggs.

Rachel Chesley, a Rex Energy spokeswoman, provided this written statement: “While we cannot comment on the settlement, Rex Energy continues to deny any wrongdoing related to this matter.”

For several months in 2011, the Centre County-based company provided some residents with water buffaloes, freestanding tanks that were ubiquitous for a time in parts of Pennsylvania shale country. Since then, residents relied on the water bank and spent untold thousands on bottled water.

Legal settlements, of course, seldom come with admissions of guilt.

“When you’re trying to piece together what really went on, you have to measure the extent of the claims versus the terms of the resolution,” said Jordan Yeager, an attorney who’s handled a number of shale gas cases, including one that resulted in the state Supreme Court invalidating key provisions of Act 13, which governs Pennsylvania’s shale industry.

In that case, the court also invoked Pennsylvanians’ constitutional right to “clean air, pure water and to the preservation . . . of the environment.”

Sometimes the size of the settlement can be telling, Yeager said, but even that is an imprecise measure and defendants settle claims for myriad reasons. One general rule of thumb is that significant bodily injury or death will often result in larger settlements. So would an adverse jury verdict or the threat of one.

In 2016, a jury awarded $4.2 million in a water contamination case against Cabot Oil & Gas from Susquehanna County. A judge ultimately rejected that figure and the parties settled last year for an undisclosed sum. Those plaintiffs, too, were bound to secrecy.

[The judges that pimp industry’s cover-up gag orders need to be sent to jail for 10 years, with only frac water for bathing and toilet, and the bare minimum of polluted tap water (with lead in it and more) for drinking and brushing (and corroding) teeth. Perhaps after that, they’d become worthy of being on the bench]

Residents of The Woodlands said they didn’t have the resources to fight the kind of lengthy legal battle it would take to bring their cases before a jury. The cases, originally filed in 2013, had already gone on for years. And Rex Energy’s disintegrating finances raised concern that they’d never be compensated.

The company, founded in the early days of the shale boom in 2007, missed a debt payment [intentionally?] and was delisted from Nasdaq in April. Its leadership cited unstable energy prices, which led to an industry-wide downturn in recent years, but planned to continue “normal operations” during restructuring.

“We have undoubtedly made progress in addressing the realities of the global commodities market but require a more fulsome debt restructuring to overcome the immense pressures our business is facing,” CEO Tom Stabley said, in a written statement this May.

“Ultimately, we decided that the best possible outcome was to put our remaining assets into the hands of owners with the financial strength necessary to position them for long-term growth and success.”

That sale is expected next month but will require the final sign-off of a judge.

[Judges: The enablers of the horrific abuses to innocent families & communities by industry]

One Woodlands resident wished for an opportunity to confront Rex Energy’s leadership — and possibly to offer them a glass of water, which still runs fizzy and sometimes murky gray.

But the resident hasn’t seen any Rex Energy contractors or employees since shortly after the water changed. 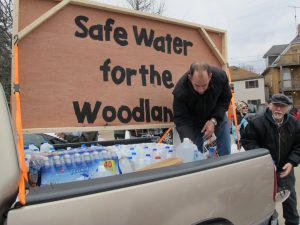 At the time of the contamination, the state DEP concluded that benzene, cyanide and other toxic chemicals discovered in wells at The Woodlands could not be linked to the fracking taking place nearby. [Koch Bros ordered it so?]

Instead, DEP officials said that an increase in demand for water stressed the local aquifer that supplied groundwater to the residents’ wells. The EPA also concluded that pre-drilling and post-drilling samples at two locations near the Rex Energy site showed similar drinking water quality.

A team of scientists and students from Duquesne University, however, found significant changes in water quality in the community since drilling began.

Spokesman Neil Shader said Wednesday that the DEP does not comment on settlements. Neither would the agency comment on the source of contamination, noting that private water supplies are not regulated in Pennsylvania.

“DEP followed its procedure for initiating, documenting and resolving water supply investigation requests and made a determination, based on its investigation, that the alleged water supply impacts were not attributable to Rex,” he said, in a written statement.

The DEP’s handling of complaints by residents of The Woodlands came as no surprise to Yeager. He’s familiar with the case from work he’s done on others.

“It doesn’t surprise me that residents were reporting these problems,” he said. “With limited staff and the budget DEP has and a variety of other reasons, there’s very little that goes into the permit approval process.”

“[The idea is] we can just trust what the drilling companies are doing . . . and everyone’s going to be all right,” he said.

“For a lot of people, that hasn’t panned out.”

Six of the eight environmental secretaries since 1995, in addition to governors, advisers and countless rank-and-file employees, have gone on to work for the energy industry.

Pastor Lee Dreyer, the 69-year-old preacher who leads White Oak Springs Presbyterian, plans to retire in about a year. He expects the water bank to continue on.

More than seven years since it began, about 30 families — far more than the number who received settlements — stop by each Monday for water. A family of four receives 20 gallons per week. It’s not enough to replace what they’ve lost, Dreyer said, but it helps with cooking and drinking water.

“The people who come to the water bank, I’m constantly amazed at how good-natured they are,” he said. “There are a couple guys I can think of who wear their anger on their sleeve — but not all the time.”

He feels it himself.

Local officials, state officials and Rex Energy have all turned a blind eye on a community that for nearly eight years subsisted without clean water, Dreyer said. The fact that Butler County used its 2014 impact fee proceeds to renovate a public swimming pool still rankles him.

If there were any justice, he said, someone would be making sure this community has clean water. A few thousand dollars given to some families and not others won’t do that.

“My anger,” Dreyer said, and then paused to collect his thoughts. “I’m a frail and simple human being. I get angry sometimes. The outlet for my anger is to help with the water bank.” 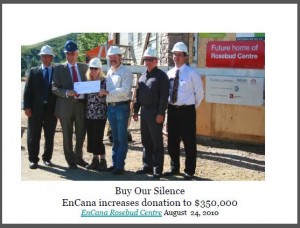 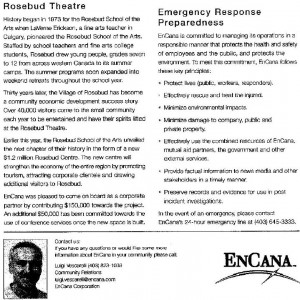