Industry didn’t do it. Water wells in Alberta have always been naturally contaminated with methane

Many in Alberta ignorantly (and to enable their greed for more and more oil and gas industry lease money) chant the AER’s, Alberta Environment’s and industry’s mantra: groundwater and water wells have always been naturally contaminated with methane, industry has never contaminated groundwater or a water well in Alberta.

Albertans have shown up at Ernst’s home, nastily demanding she drop her lawsuit because they know her water was naturally contaminated with methane. They never bring any records with them to prove this or tell Ernst where she can access them.

AER (then EUB) lawyer ‘n bully Rick McKee aggressively insisted to Ernst in his June 8 2006 interrogation of her in front of a witness, that after her contaminated water hit front page of the Edmonton Journal (Dec 13 2005), many Albertans emailed the regulator to state her well water has always been naturally contaminated with methane. McKee refused to provide their names and emails, any documented evidence or Ernst’s historic water well records to back this up.

Snap above taken from the historic record of the Ernst water well filed with Alberta Environment. Encana’s 2003 baseline testing of Ernst’s water well shows no gas present. (After Encana broke the law and contaminated the Rosebud aquifers, the company lies on its website and to media that Ernst refuses to cooperate, refusing to let the company test her water.)

As of the date of this post, no defendant has filed with Ernst and no authority or citizen has sent to Ernst evidence proving her water was always contaminated with methane.

The only records showing methane, ethane and other red flag indicators of industrial contamination in Ernst’s water are dated after Encana illegally and secretly fractured the aquifer that supplies Ernst’s water well and others in her community.

This historic water well data compiled by the Alberta Research Council to end 1964 (when the council still had credibility) show less than 1.6% (51 of 3,141) had gas present (6 of the 51 were drilled to gas well depths). As of the date of this post, Ernst had only found the above three historic water well reports by the Alberta Research Council. If anyone finds more, please send to Ernst and she will scan/upload and add to this post. Thank you.

The community of Bow Island Alberta was one of the first communities along with Medicine Hat and Redcliff to commercially operate the shallow gas fields as public utilities. The Bow Island public gas operation was sold off to one of Alberta’s major natural gas retailers years ago. This “water well” may actually be another one of the many unregistered shallow gas wells that was once operated by the town of Bow Island. Shallow gas was such a problem in the Palliser Triangle that in 1903 a group of farmers near Medicine Hat actually sued the CPR for selling them “defective land” with a claim that it was impossible to hand dig a water well without causing a spark which would result in an explosion that would either kill or injure the man who was digging. That 1903 court case was held in Medicine Hat which in 1903 was a town located in the federal district of Assiniboia. The CPR won the case by claiming that the federal government of Canada owned the gas whereas the CPR owned the land and coal rights on the land that was sold. This raises the question of how the CPR could disclaim ownership of all gas rights to their federal land grants in 1903 but have their subsidiary energy company Encana reclaim re-claim the rights they gave up in evidence given in 1903. An abandoned water [or shallow gas or historic test] well was discovered to be leaking gas just 2.5m from the Timmons family home. Chantel Timmons The well has 4 pallets covering the 8 foot by 6 foot hole of the exposed well found in October 2016. Chantel Timmons An abandoned water [or shallow gas or historic test] well was found to be leaking gas just 18 inches below their driveway.
Chantel Timmons During the first 48 hour after excavation, the pipe casing leaked a white foam.
Chantel Timmons Chantel Timmons struggles to get help from the Alberta government to protect her family from the recently discovered water [or shallow gas or historic test] well leaking gas.

BOW ISLAND, AB. – The Timmons family was given some startling news in October.

Chantel Timmons was told methane gas had been detected leaking into their home, just outside of Bow Island, from an unknown abandoned water [or shallow gas or historic test] well. It is buried just two and a half metres from their door.

“We were told if somebody were to take a lighter, they would of been able to light the gas in the garage because it was such a high concentration,” she said. [Or, start a vehicle, or a lawn mower, or flip a light switch, or static from your hair or clothes or petting a dog or cat]

Timmons said they built their dream home 5 years ago on her family’s farm and had no idea there was water well 18 inches below her driveway.

“Nobody really knew what we should do,” she said. “Everybody just scratched their head wondering how it had been here and no body knew.”

The undocumented water well was unknown to anyone. The land has been in Timmon’s family since the early 1970s. She has acquired the land titles dating back to 1912 on the property and the water well appears to be unregistered.

“It’s frustrating and scary to know it’s there,” she said.

No one has responded to Timmons correspondence.

CHAT News reached out to the AER, spokeperson Cara Tobin said the Timmons case isn’t in their jurisdiction.

“Water wells are not regulated by the AER, we are not the regulatory body she (Chantel Timmons) would have to speak to,” she said. [Shallow gas wells, especially those leaking and abandoned are the responsibility of the AER. But, the courts have sleazily given AER “No Duty of Care” for any harm, even grossly negligent, the regulator causes to Alberta families, and complete legal immunity, even for violating Canada’s constitution]

Drew Barnes, MLA for Cypress – Medicine Hat said he has been advocating for the family, by writing letter and requesting a meeting with the Minister of Energy, Margaret McCuaig-Boyd. He wants someone to take responsibility.

“It seems clear cut to me that it is the Alberta Government and the Orphaned Well Fund because of the natural gas,” he said. [Did a frac hit occur nearby causing the white foam? Is anyone searching the gas and oil well data? Has anyone searched out the data for the area around the home for all historic shallow test natural gas wells that were never plugged? What chemicals are present in the foam and water in the well? ]

Timmons has taken her plea for help to social media. Tweeting out for help from the Alberta government. She said she won’t give up her fight to help protect her family and their home. [Emphasis added] 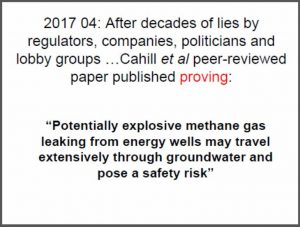 Note the dotted “Acute Threshold” line in red above.