At the beginning of the decade, five companies began eyeing Spain’s underground resources, promising that the US shale boom could be reproduced on the Iberian peninsula. The conservative government of the Popular Party (PP) lent its weight to fracking – or hydraulic fracturing, the technique used to extract gas from underground shale deposits – in order to reduce the country’s near-complete dependence on hydrocarbon imports. But low gas prices and strong social rejection, including from local and regional authorities, have thwarted those plans. Now, all five firms have given up on fracking altogether.

Anti-fracking sign in the village of Quintanilla-Sobresierra (Burgos). GORKA LEJARCEGI

… Fracking has revolutionized the energy market in the US, and industry players thought the same would soon happen in Spain.

We cannot ban it, but we can make it impossible

Spain, and most particularly the Basque Country and Cantabria regions to the north, contains a gas supply potential equal to 70 years of consumption, according to a 2013 report commissioned by the Spanish Association of Research, Exploration and Production of Hydrocarbons and Subterranean Storage Companies (ACIEP).

That amount is worth €700 billion, according to this industry group.

… The PP administration changed national legislation to make it more favorable to fracking, but soon it was the PP itself that was fracturing.

In Spain’s national Congress, the PP managed to keep its deputies in check, and the party’s absolute majority ensured that legislative changes got greenlighted. But inside several regional assemblies, including those of Cantabria and the Basque Country, PP representatives supported anti-fracking laws instead.

The rejection trickled down to the local level. Five municipalities with PP mayors in Burgos province vocally opposed a fracking project in the area led by the Canadian company BNK. “It created a sense of legal insecurity,” hydrocarbon industry sources admit 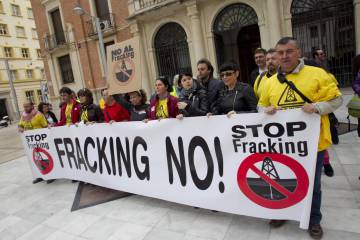 A protest in the Valencia city of Castellón. MARTÍ DOMENECH

In March 2016, with the PP no longer in a majority position, congressional groups presented an initiative calling on the government to ban the practice. By then, companies were already pulling out of Spain, partly because of a global drop in gas and oil prices.

At this point, all five firms at the helm of a pro-fracking lobby called Shale Gas España – BNK, Heyco, R2 Energy, San Leon and the Basque Country’s own Sociedad de Hidrocarburos de Euskadi (SHESA) – have given up on fracking in Spain.

SHESA is a public corporation that answers to the Basque government. The company admits that it has already ceded one of its five licenses, covering fracking rights on a section of land known as Angosto 1 and extending over Cantabria, the Basque Country and the region of Castilla y León. SHESA will now fight for its other four licenses, but it plans to use conventional techniques there.

It’s a similar story at the other four companies leading the fracking movement in Spain. BNK gave up on its two licenses in 2016, and San Leon did the same with its six permits. When the PP lost control over the regional government of Valencia in 2015, R2 Energy announced it would not use fracking under its three licenses there. And Heyco was working in association with SHESA.

One might say that Spain’s fracking fever – or bubble – begins and ends in the Basque Country. In 2011, the regional premier at the time, the Socialist Patxi López, traveled to Texas and, standing at the foot of a shale gas well, announced that his region had enough resources to be self-sufficient for 70 years. But six years on, while Basque legislation may not ban fracking outright, it places such high environmental demands on operators that it is almost nonviable. The law was born out of a popular initiative that collected more than 100,000 signatures, and received favorable votes from the PP, Basque Socialists (PSE) and the radical nationalists of EH Bildu, in a rare display of political agreement.

Several regional governments had banned fracking outright before this, but Spain’s Constitutional Court struck down these laws one by one on the grounds that regional authorities were overstepping their powers and encroaching on federal prerogatives. So Basque legislators came up with the idea of allowing the technique while imposing extremely strict conditions. The central government has appealed, and the Constitutional Court is still considering the case.

“We cannot ban it, but we can make it impossible,” sums up the regional environmental chief, Francisco Martínez Arroyo. “There is a very significant movement of social rejection.”

“Social pressure has played a relevant role, not just in Spain, but all over Europe,” says Samuel Martín-Sosa, of the green group Ecologistas en Acción. “The only EU country that remains clearly pro-fracking is Britain.” [Emphasis added]

2013 11 02: Spain alters national rules to allow fracking and overrule regional governments such as Cantabria that voted unanimously with support from all political parties to ban fracking

2013 10 03: Spain Suffers from Hundreds of Earthquakes Caused by Offshore Drilling; Largest is Magnitude 4.2; Citizens Complain of Cracks and Tremors Whipping Their Homes