Brilliant letter by John Baxter: TAR SANDS ARE NOT OILSANDS. Nikiforuk risks arrest on Burnaby Mountain for future of his sons. Kinder Morgan Canada Ltd’s Investors Getting Nervous? Company pulls back in a Sunday Press Release!

TAR SANDS ARE NOT OILSANDS by John Baxter, published in the 1990’s in Gulf Islands Driftwood (Salt Spring Island newspaper)

In the late 1950’s I spent part of a very cold winter North of Fort McMurray supervising an exploratory drilling project to evaluate the reserves of ‘Bitumen’ under our company’s ‘Alberta Tar Sands Lease’.

Since then neither a review of the technical literature of the day, 1960’s statements by Alberta Premier Peter Lougheed, or indeed, of the reports of the explorers who first saw the smoking river banks of the Athabasca River ever used the word ‘oil’. The substance is ‘tar’.

It is no more oil than the cattle in Aberta feedlots are filet mignon. Come to think of it, a feedlot is a perfect microcosm of the tar sands extraction process and the resultant pollution. Both result in the depletion and pollution of water resources, production of high volumes of atmospheric altering gases and an irreversible toxic alteration of the biosphere.

Every time you use the phrase ‘oilsands’ you are not only technically incorrect, but you are falling victim to the oldest of con games..”if you repeat a lie often enough….!”

2018 04 07: World Renowned Journalist Andrew Nikiforuk risks arrest for the future of his sons

… Nikiforuk is a journalist and author of books on the resource industry, including Tar Sands, Slick Water and The Energy of Slaves, voiced scathing criticism of Canada’s federal government. Standing with First Nation chiefs in the exclusion zone, he said he was willing to risk arrest to express his opposition to the  [tar] pipeline expansion.

“I feel I have a moral obligation to resist governments and political parties that don’t represent our best interests anymore. I’m most worried about the state of our democracy and how our political leaders continually fail us,” Nikiforuk said.

He said he believed the Canada was headed for a “difficult, problematic transition off fossil fuels,” mainly due to a lack of government leadership.

“Politicians refuse to even move in that direction. They’re compromising the future of my children,” he said.

“Why are we exporting bitumen to China? This is a very bad resource policy, period,” Nikiforuk said.

“The economics are appalling, the politics are appalling. “The only reason we’re doing it is because Trudeau wants to sign a free trade agreement with China. The Chinese have said that unless they have pipeline access to bitumen, they will not sign this agreement.”

… Trans Mountain did not respond to National Observer’s request for a comment in time for publication. [Too busy fielding off angry calls from big investors and writing their press release?]

[NOT ONE MAIN MEDIA IN CANADA REPORTED ON THIS SERIOUS EVENT]

Too many KM shareholders living in BC lower main land with holiday homes along the west coast? They see the inevitable tar slithering up their walls?

Will Consult with Stakeholders until May 31st on Potential Paths Forward

CALGARY, April 8, 2018 /PRNewswire/ – Kinder Morgan Canada Limited (TSX: KML) today announced that it is suspending all non-essential activities and related spending on the Trans Mountain Expansion Project.  KML also announced that under current circumstances, specifically including the continued actions in opposition to the Project by the Province of British Columbia, it will not commit additional shareholder resources to the Project.  However, KML will consult with various stakeholders in an effort to reach agreements by May 31st that may allow the Project to proceed.  The focus in those consultations will be on two principles:  clarity on the path forward, particularly with respect to the ability to construct through BC; and, adequate protection of KML shareholders.

“As KML has repeatedly stated, we will be judicious in our use of shareholder funds.  In keeping with that commitment, we have determined that in the current environment, we will not put KML shareholders at risk on the remaining project spend,” said KML Chairman and Chief Executive Officer Steve Kean.  The Project has the support of the Federal Government and the Provinces of Alberta and Saskatchewan but faces continued active opposition from the government of British Columbia. “A company cannot resolve differences between governments.  While we have succeeded in all legal challenges to date, a company cannot litigate its way to an in-service pipeline amidst jurisdictional differences between governments,” added Kean.

“Today, KML is a very good midstream energy company, with limited debt.  The uncertainty as to whether we will be able to finish what we start leads us to the conclusion that we should protect the value that KML has, rather than risking billions of dollars on an outcome that is outside of our control,” Kean said.  “To date, we have spent considerable resources bringing the Project to this point and recognize the vital economic importance of the Project to Canada.  Therefore, in the coming weeks we will work with stakeholders on potential ways to continue advancing the Project consistent with the two principles previously stated.”

KML had previously announced a “primarily permitting” strategy for the first half of 2018, focused on advancing the permitting process, rather than spending at full construction levels, until it obtained greater clarity on outstanding permits, approvals and judicial reviews.  Rather than achieving greater clarity, the Project is now facing unquantifiable risk.  Previously, opposition by the Province of British Columbia was manifesting itself largely through BC’s participation in an ongoing judicial review.  Unfortunately BC has now been asserting broad jurisdiction and reiterating its intention to use that jurisdiction to stop the Project.  BC’s intention in that regard has been neither validated nor quashed, and the Province has continued to threaten unspecified additional actions to prevent Project success. Those actions have created even greater, and growing, uncertainty with respect to the regulatory landscape facing the Project.  In addition, the parties still await judicial decisions on challenges to the original Order in Council and the BC Environmental Assessment Certificate approving the Project.  These items, combined with the impending approach of critical construction windows, the lead-time required to ramp up spending, and the imperative that the company avoid incurring significant debt while lacking the necessary clarity, have brought KML to a decision point.

Kean continued:  “We appreciate the support shown by the Federal Government and the Provinces of Alberta and Saskatchewan, and are grateful for the strong endorsements among the majority of communities along the route and 43 Indigenous communities, as well as customers, contractors and unions. The fact remains that a substantial portion of the Project must be constructed through British Columbia, and since the change in government in June 2017, that government has been clear and public in its intention to use ‘every tool in the toolbox’ to stop the Project.  The uncertainty created by BC has not been resolved but instead has escalated into an inter-governmental dispute.”

Trans Mountain has spent C$1.1 billion (approximately half of which has been spent since the KML IPO) and made unprecedented efforts to develop the Project since its initial filing with the National Energy Board in 2013.  As a result of extensive engagement, a comprehensive regulatory process and detailed engineering and design, the Project has changed in several, substantive ways during the intervening five years, including: thicker wall pipe in environmentally sensitive areas such as watercourses and aquifers; avoidance of several fish bearing streams; changes to the detailed route of the pipeline in consideration of community needs and concerns and environmental impacts; Burnaby tunnel construction, to avoid neighbourhoods and minimize impacts; changes to Burnaby Terminal tank design in response to risk assessments; and, enhancements to marine safety that will benefit all marine users.

In addition, in an unprecedented negotiated commitment, Trans Mountain agreed to provide financial benefits from the Project, if completed, to British Columbia for a newly-formed BC Clean Communities Program to be accessed by communities for local projects that protect, sustain and restore BC’s natural and coastal environments.

“While we are prepared to accept the many risks traditionally presented by large construction projects, extraordinary political risks that are completely outside of our control and that could prevent completion of the project are risks to which we simply cannot expose our shareholders,” said Kean.  “However, given the importance of the Project to Canada and Alberta, to Indigenous communities, our shippers, our contractors, and working Canadians, we are committed to trying to find a way forward, working with stakeholders between now and the end of May on measures that may allow us to advance this critical project, but only if it does not subject KML shareholders to undue risk.  If we cannot reach agreement by May 31st, it is difficult to conceive of any scenario in which we would proceed with the Project.  The time period for reaching a potential resolution is short, but necessarily so because of approaching construction windows, the time required to mobilize contractors, and the need to commit materials orders, among many other imperatives associated with such a large project.”

Given the current uncertain conditions, KML is not updating its cost and schedule estimate at this time.

Please join KML and Kinder Morgan, Inc. (NYSE: KMI) at 8:30 a.m. Eastern Time on Monday April 9, 2018, at www.kindermorgancanadalimited.com or at www.kindermorgan.com for a LIVE webcast conference call that will include a discussion of the matters described in this news release.  Dial: 1-517-308-9248 Passcode: 2088258

About Kinder Morgan Canada Limited (TSX: KML). KML manages and is the holder of a minority interest in a portfolio of strategic energy infrastructure assets across Western Canada. The Trans Mountain Pipeline system, with connections to 20 incoming pipelines and current transportation capacity of approximately 300,000 barrels per day (based on throughput of 80 percent light oil and refined products and 20 percent heavy oil), is the only Canadian crude oil and refined products export pipeline with North American West Coast tidewater access. In Alberta, KML has one of the largest integrated networks of crude tank storage and rail terminals in Western Canadaand the largest merchant terminal storage facility in the Edmonton market. KML also operates the largest origination crude by rail loading facility in North America. In British Columbia, KML controls the largest mineral concentrate export/import facility on the west coast of North America through its Vancouver Wharves Terminal. Through its Puget Sound pipeline system, KML ships crude oil to refineries in Washington state and its Cochin Pipeline system transports light condensate originating from the United States to Fort Saskatchewan, Alberta. For more information please visit www.kindermorgancanadalimited.com.

The foregoing list should not be construed to be exhaustive. In addition to the foregoing, important additional information respecting the material assumptions, expectations and risks applicable to the forward-looking statements included in this news release are set out in KML’s annual report on Form 10-K dated February 20, 2018 under the headings “”Information Regarding Forward-Looking Statements”  and “Risk Factors,”and in KML’s management’s discussion and analysis of financial condition and results of operations for the year ended December 31, 2017 under the heading “Outlook,”  each available under KML’s profile on SEDAR at www.sedar.com and filed with the United States Securities and Exchange Commission and available at www.sec.gov. Shareholders and prospective investors are urged to review and carefully consider such information prior to making any investment decision in respect of KML’s restricted voting shares or other securities. The risk factors applicable to KML could cause actual results to vary materially from those contained in any forward-looking statements. KML disclaims any obligation, other than as required by applicable law, to update the forward-looking statements included in this news release. 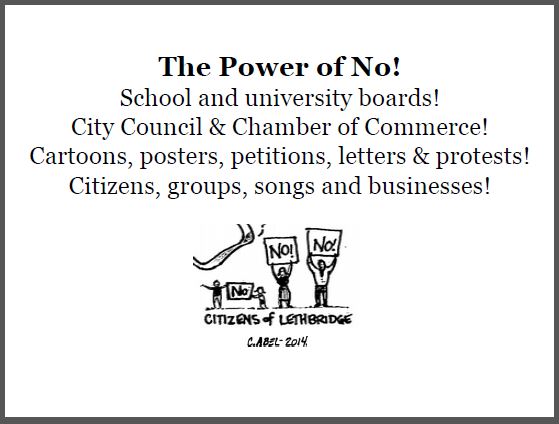 The citizens and businesses of Lethbridge kept fracing out, with their fierce Power of No! They did not feebly cave like Council of Canadians and endless other environmental NGOs, asking for regulations (which just gives industry and oil corrupted governments like Rachel Notley’s NDP social licence to frac us all and contaminate our drinking water).