British Columbians’ views on hydraulic fracturing have “hardened,” 61 per cent opposed; Opposition to LNG “up significantly”

British Columbians’ views on hydraulic fracturing have “hardened,” with 61 per cent saying they don’t support the industry.

The poll found support for LNG has waned since a study conducted in August 2013, while opposition to fracking has grown.

The pollster carried out an online study between March 16 and 18, taking a random sample of 802 respondents—including 57 from Northern B.C.

Of those, 43 per cent supported the provincial government’s goal of establishing an export LNG industry—a decrease of seven points from the last poll, taken shortly after the 2013 provincial election.

Opposition to fracking, meanwhile, grew by 14 points in the 30 months between studies, to 61 per cent. Only 23 per cent said they said they support the process, while just over half (55 per cent) were aware fracking takes place in British Columbia.

Three-in-five respondents had specific concerns about the fracking process, including possible water contamination (62 per cent), its impacts on landscapes (62 per cent), and its potential to cause earthquakes (57 per cent).

On the benefits of fracking, 54 per cent believed it would lead to more jobs in B.C., 51 per cent thought it would drive foreign investment, and another 54 per cent saw LNG as a cleaner alternative to coal.

“It’s an emotional issue,” said pollster Mario Canseco, saying LNG was an “essential component” of the 2013 election. “I think everybody expected that because of how this was framed, we’d be enjoying the benefits of (LNG) already.”

He pointed out that not one of 20 coastal LNG plants has entered the construction phase.

Canseco added the issue appears to have become regionalized, with 42 per cent saying LNG will “exclusively benefit” only some communities.

“Fewer British Columbians in 2016 believe that the LNG industry will be auspicious for every resident in the province,” he said in a release.

The study has a 3.5 per cent margin of error. [Emphasis added]

It found 43 per cent of British Columbians support the provincial government’s intention to expand the development and export of LNG, while 41 per cent are against it. That’s a big change from the numbers recorded post-provincial election in August 2013, when 50 per cent of people welcomed the idea. Now support is down to 43 per cent, and opposition is up significantly.

“We see a lot of people who are starting to have second thoughts about what the industry will mean to them. They are starting to question where it’s going to be beneficial for all BC residents,” explains pollster Maria Canseco.

And he adds there appears to be another concern. “What we see now are the economic benefits trending downward and the environmental concerns being higher than they were before, especially when it comes to the treatment of water and the notion that fracking is not something that many residents like.”

The numbers also found nearly three-in-five British Columbians are also worried about the alteration of the landscape. While, more than half are also worried about fracking triggering earthquakes, causing increased health problems and leading to higher carbon emissions. [Emphasis added. How fabulous so many Canadians have educated themselves and are no longer buying the propaganda and lies promoted by regulators, politicians, “expert” frac panels, Munk School of Global Affairs and Council of Canadian Academies]

Support for the government’s LNG push has dropped, while negative concerns over fracking have increased.

In the online survey of a representative sample, 43% of British Columbians support the provincial government’s intention to expand the development and export of LNG, while 41% are opposed. This is a significant change from the numbers registered in August 2013, when 50% of residents welcomed the proclaimed LNG expansion and only 32% opposed it. 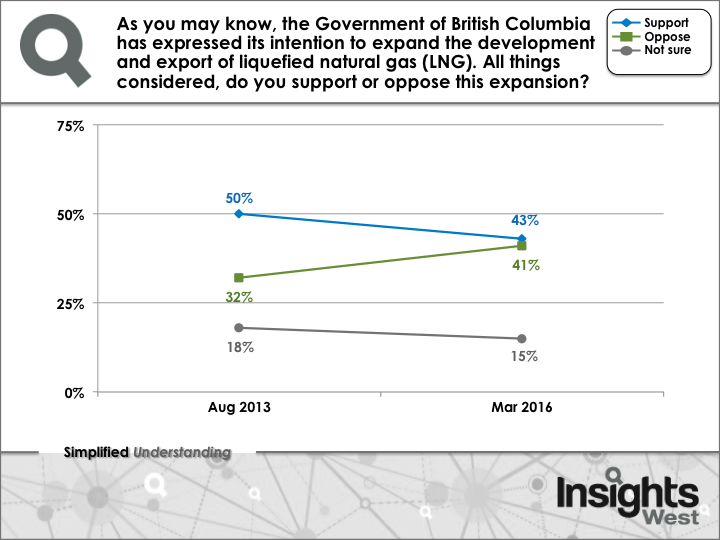 The drop in support for LNG expansion is accompanied by hardened views on hydraulic fracturing or fracking—the procedure by which oil and gas companies inject water and chemicals into the ground to fracture underlying shale rock formations and extract natural gas.

Three-in-five British Columbians (62%) say they are familiar with fracking and more than half (55%) say the procedure is currently being done in the province. However, only 23% of residents support fracking, while 61% (+14 since August 2013) are opposed to it.

When asked about some of the benefits of fracking, 54% of British Columbians believe it will lead to more jobs in the province, and say LNG is more environmentally friendly than coal or other fuels (also 54%). While 51% think fracking will lead to more foreign investment in the province, only 41% believe it will lower natural gas prices by increasing supply and less than two-in-five (37%) expect fracking to make British Columbia a world leader in exporting LNG.

More than three-in-five British Columbians are concerned about specific effects of fracking, including the perception of containment ponds being an environmental hazard (68%), the negative impact and alteration of the landscape (62%) and the contamination of the water supply (also 62%). More than half are also worried about fracking triggering earthquakes (57%), causing increased health problems among residents (53%) and leading to higher carbon emissions (51%).

“The public’s distaste towards fracking is playing a role in perceptions of the provincial government’s actions on the LNG file,” says Mario Canseco, Vice President, Public Affairs, at Insights West. “However, fewer British Columbians in 2016 believe that the LNG industry will be auspicious for every resident of the province.”

About Insights West:
Insights West is a progressive, Western-based, full-service marketing research company. It exists to serve the market with insights-driven research solutions and interpretive analysis through leading-edge tools, normative databases, and senior-level expertise across a broad range of public and private sector organizations. Insights West is based in Vancouver and Calgary.

About this release:
Results are based on an online study conducted from March 16 to March 18, 2016, among 802 adult residents of British Columbia. The data has been statistically weighted according to Canadian census figures for age, gender and region. The margin of error—which measures sample variability—is +/- 3.5 percentage points. Click to view the detailed data tabulations.