Colorado: After thousands harmed, Bill introduced for an Act on Oversight of *All* (not just some frac) Chemicals Used in Oil & Gas Production (to also disallow trade secrets). Will the oil & gas industry and the rich (judges included) allow this to pass? 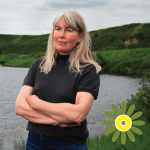 Even after sacrificing 18 years and $400,000.00 of my life long savings (and more in kind donations from others concerned about frac’ing), and being betrayed by the courts and my backstabbing quitting lawyers, Murray Klippenstein and Cory Wanless (that did not quit lawsuits they took on years after mine), my community still does not know what chemicals Encana/Ovintiv illegally injected into our drinking water aquifers in 2004.

We bathed in and ingested contaminated water for years (including 40,000-50,000 tourists from around the world); we breath those secret chemicals in our air from Encana/Ovintiv’s flares and compressors (now Lynx) and blowing off the land that feeds us and others because of the company dumping its toxic waste on farm land.

Encana/Ovintiv dumping its secret ingredients waste on foodland near my home.

Our frac’d water caused incredibly painful caustic burns to my skin and eyes, and repulsed my dogs.

Bandit on the left, Magic on the right.

Rosebud hamlet and neighbouring communities were recently pipelined safe alternate water from Calgary (many millions of dollars paid for by Canadian taxpayers); I was not. I remain with frac’d and contaminated well water too dangerous to even use to flush toilets.

I must haul alternate water which requires driving 45 expensive minutes, one way, which is getting harder and harder for me to do, as I age.

If by some miracle the bill does pass in Colorado, will complete honest chemical disclosure happen in Rape & Pillage Canada?

Text of the Bill

In the first week of April 2022, Colorado State Reps. Froelich and Caraveo introduced
comprehensive oil and gas chemical disclosure legislation in the Colorado
House of Representatives that has four important improvements over most
frac chemical disclosure rules:

1) it would require disclosure of all downhole chemicals, not just those used in fracking;

2) it would prohibit the use of trade secrets to conceal the identities of individual chemicals;

3) it would require disclosure before downhole operations begin; and

4) it would require disclosure from chemical manufacturers who know the most
about the chemical products used in oil and gas extraction.

2021: New Report: “Nightmare Contaminant” Forever Chemicals (PFAS) Use in Drilling & Frac’ing in More than 1,200 Wells in Arkansas, Louisiana, Oklahoma, New Mexico, Texas, Wyoming between 2012 and 2020, including by Encana (in Canada too?). Records obtained from US EPA under Freedom of Information Act. Did Encana now Ovintiv inject PFAS into Rosebud and Pavillion drinking water aquifers?

Frac Field in NEBC: Hold your breath and that of your loved ones, all day and night long.

Alberta is a Fracking Black Hole for Information! Since 2006, Ernst has been trying to get disclosure of the chemicals Encana injected into her community’s drinking water aquifers and elsewhere, with zero success, not even for her lawsuit, Alberta Rules of Court do not allow trade secrets but no authority is compelling Encana to disclose the information

2017: Firefighters: Increased disclosure needed for fracking emergencies: “Not requiring fracking companies to disclose trade secret chemicals to those we entrust with our safety, even during a disaster, is just plain irresponsible.”

2016: Albertans still don’t know what toxic oilfield chemicals their children are breathing. When will companies be ordered to fully disclose all chemicals, including trade secrets, before racing toxic truck loads through school zones, by hospitals, where children play, and before injected, spilled, dumped, spread on foodlands, flared, vented, spewed from endless facilities?

2014: US Department of Energy Advisory Board Task Force Report on FracFocus 2.0 concludes 84% of disclosures kept secrets

MUST READ Diana Daunheimer: Alberta Energy Regulator should be ashamed, AER Directive 60 Deregulation as the frac poisons ramp up

2014: Diana Daunheimer Presents to Alberta Surface Rights Federation: Fracturing our lives and how it affects us all

2006: My well water after Encana/Ovintiv illegally frac’d my community’s drinking water aquifers (it’s in the above photo also in the Aquafina bottle):

2004: Encana/Ovintiv frac’d and contaminated drinking water aquifers in Colorado and the harmed still do not know what toxic chemicals the company poisoned them with.

2004: Alleged Violations of the rules and regulations of the Colorado Oil and Gas Conservation Commission (COGCC) by EnCana Oil & Gas (USA) Inc. Cause No. 1V, Order No. 1V-276 before the Oil and Gas Conservation Commission of the State of Colorado, September 16, 2004. 29
The COGCC staff hand-delivered a Notice of Alleged Violation (“NOAV”) to EnCana on April 23, 2004. …The NOAV cited Rule 209., failure to prevent the contamination of fresh water by gas, Rule 301., failure to notify the Director when public health or safety is in jeopardy, Rule 317.i., failure to pump cement 200’ above the top of the shallowest producing horizon, Rule 324A., impacts to water quality and Rule 906.b.(3), failure to report a release to the Director.

2004: Encana/Ovintiv illegally, intentionally, fracs into Rosebud’s drinking water aquifers and did not tell the community.

2003: Again, Encana/Ovintiv files with the water regulator and groundwater database the company’s plan to illegally frac in Rosebud’s drinking water aquifers. No one told the community.

2001: Encana/Ovintiv files with the water regulator and groundwater database the company’s plan to illegally frac in Rosebud’s drinking water aquifers. No one told the community.