Coming soon to an Alberta rural home near you: Double property taxes? Triple? Canadian Association of Petroleum Producers (CAPP) not happy with being able to freely destroy roads and other tax payer funded infrastructure, massive deregulation, regulators looking the other way while abusing harmed citizens, now asking municipalities for more

A proposal to cap tax rates imposed on oil and gas companies may threaten the structure of the Ponoka County tax revenue pool.

At Ponoka County’s Tuesday, Jan. 27 meeting Reeve Paul McLauchlin briefly mentioned the proposal being made by the Canadian Association of Petroleum Producers for a cap to be introduced along with the new Municipal Government Act (MGA). [Is a cap to benefit multi-billion dollar profit making corporations the purpose of the new Act?]

Not much is known by Ponoka County about the proposal but CAO Charlie Cutforth feels companies are looking for a limit to be placed upon mill rates municipalities can charge.

The current MGA is under review and Cutforth believed an updated version will be released sometime in 2016.

Across the province, between 60 and 90 percent of a county’s tax revenue comes from oil and gas activity in its lands. “One of the biggest concerns right now is municipal funding,” said McLauchlin.

For Ponoka County, 72 per cent of its tax revenue is derived from the oil and gas industry. Residential supplies another 23 per cent of the county’s tax revenue and the remaining 5 per cent comes from farmland and commercial.

Both Cutforth and McLauchlin believe the proposal made to the Alberta Government stems from the Canadian Association of Petroleum Producers feeling companies are not being treated fairly when it comes to tax rates. “They’re feeling some (oil and gas) jurisdictions are being gouged,” said McLauchlin. “Some municipalities, in my opinion, have taken liberties with the fact that oil companies have deep pockets,” said Cutforth.

McLauchlin says discussions for the idea began approximately one year ago. Ponoka County has a healthy relationship with the oil and gas activity going on within it borders but McLauchlin admits the bustle is one of the largest factors of wear and tear on county roads.

“We have a road out in the west country (Iola Road) and we just did a traffic count on,” said McLauchlin. In one week the count revealed 3,000 vehicles, with the large majority relating to oil and gas, such as fracking vehicles.

‘They pound the business out of our roads,” said McLauchlin.

At the same time he acknowledged how vital the oil and gas industry is to the county. “They’re good neighbours, I think we’re going to be okay.”

“That would cause significant change in the tax structure of the county,” McLauchlin added, referring to the possibility of a cap.

The recent dive in fuel prices across the province will damper any new oil and gas growth in the county but Cutforth says whatever remains active is taxable.

In 2014 Ponoka County received just under $1 million in drilling licenses. Companies looking to drill wells apply to the province for a drilling licence and pay certain amounts depending on factors such as depth. A portion of that payment is then given to the county. [Does $1 Million cover the many millions required to repave highways and repair gravel roads?]

Because of the low cost of oil Cutforth says the county can expect only $200,000 in 2014, [That pittance is going to repair the road damages caused by oil and gas companies?] adding another cut to its revenue pool.

If any kind of cap is approved and the county begins losing a significant portion of its tax revenue the money may have to come from residential and farmland, or cut services, or both, says Cutforth. [Oil and gas companies won’t stand for cuts in services like emergency services, grading, snow plowing, highway paving, etc. Will farm and rural home property taxes need to sky rocket to match the loss from the cap for companies?]

However, he does not believe that kind of “desperation” is a probability in the near future.

With the lowest municipal tax rates in the province Cutforth says the county would have a bit of wiggle room if it came to raising taxes to cover the difference. [Emphasis added] 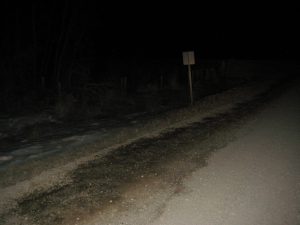 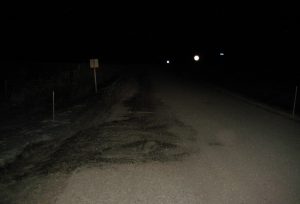 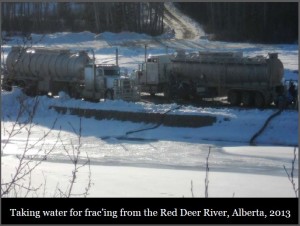 Who’s keeping track? Companies taking water from the Red Deer River for a frac job, then traveling and destroying public roads, repairs paid for by taxes of families to municipalities, damages to personal vehicles driving on destroyed roads paid for by families? 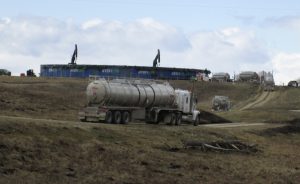 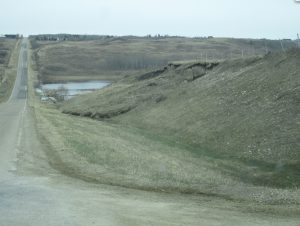 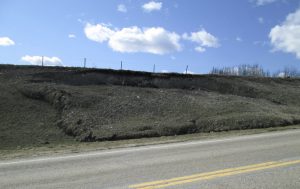