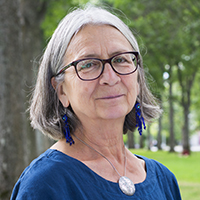 Indigenous scholar Val Napoleon has been appointed interim Dean of Law from October 1, 2021 to December 31, 2022. Napoleon is the director of the Indigenous law degree program at UVic and of the Indigenous Law Research Unit, which she co-founded in 2012 to partner with Indigenous communities, helping them to research, re-articulate and rebuild their laws. She also holds the Law Foundation Chair of Indigenous Justice and Governance, has been named a Canadian Indigenous Bar Association People’s Counsel—a rare distinction awarded to a First Nations, Inuit, or Metis lawyer for “outstanding achievements in the practice of law”—a L’expert Zenith Award, and was inducted into the Royal Society of Canada’s College of New Scholars in 2017. In 2021 she received a national Indspire Award and an honorary Doctorate of Laws from UNBC.

“ I am honoured with the trust of my colleagues in taking on this new role,” says Napoleon. “I am also excited by the energy of our amazing students, our fabulous staff, and our exceptional faculty. I know it is going to be a year and a half of hard work, but it’s going to be great!”

Napoleon is well-placed to take on the role of interim dean while a search is conducted for the next dean of the faculty.

Susan Breau, who has been serving as Dean since July 2019, is taking a research leave starting September 30, 2021 to pursue several research projects before her retirement in 2023.

2019: Recognizing multiple legal systems: Decolonizing our understandings of “The” Law with Val Napoleon, indigenous scholar and law professor, being reminded to never think of Canada’s legal system as “the only” legal system.

Paintings above by Val Napoleon. Her art cards are available for purchase