Encana pays $3.1B to enter Eagle Ford shale by Oil and Gas Financial Journal, June 9, 2014
Encana, Canada’s largest natural gas producer, has entered a deal with Freeport-McMoRan Oil & Gas to purchase Eagle Ford shale assets for $3.1 billion.
The buy was spurred by Encana’s strategy to reduce its dependence on natural gas and refocus on fields with reserves high in oil and natural gas liquids.

The acreage sits in Karnes, Wilson and Atascosa counties in south Texas and has an estimated drilling inventory of more than 400 locations. The 45,500 net acres hold estimated net proved reserves totaling 59 million barrels of oil equivalents (boe) and estimated net proved and probable reserves of 69 MMboe at year-end 2013. Production from the field averaged 53,000 boe/d in the first quarter of 2014. “Gaining a position in a world class, oil-rich resource play like the Eagle Ford accelerates the transition of our portfolio and underscores our investment focus on high margin assets,” says Doug Suttles, Encana president and CEO.

In Canada, the company is focused on the Montney in British Columbia and the Duvernay in Alberta. In the US, the company is looking to accelerate efforts in the DJ Basin in Colorado, the San Juan Basin, and the Tuscaloosa Marine Shale.

Now, with anticipated proceeds from its recent Jonah sale and other transactions, as well as cash on hand, Encana seems well positioned to fund the transaction into its sixth growth area.

In the first quarter of 2014 production from the acquired acreage included approximately 46,000 bbls/d of total liquids production and 44 MMcf/d of natural gas, generating operating cash flow of US$327 million, with about 75% of the total production volumes for the period being oil.

Encana expects the assets to be free cash flow positive in 2014, allowing it to execute its existing capital plan for 2014 without redirecting capital from its other five core growth plays. Earlier in the year, the company noted plans to allocate roughly 75% of the $2.4-$2.5 billion 2014 CAPEX to the growth plays. As for the Eagle Ford acreage, Encana plans to have at least four drilling rigs running by the end of the year. … The transaction is expected to close by the end of 2Q14. [Emphasis added]

Interactive: Calgary’s top-paid executives include more than a few millionaires [including near $14 million for Doug Suttles and $8 million for Randy Eresman – reportedly ‘retired, effective immediately’ more than a year ago] by Calgary Herald, June 12, 2014 Special payments boost earnings of city’s highest paid executives by Dan Healing, June 12, 2014, Calgary Herald
Multimillion-dollar special payments played a major role in establishing the Top 10 pecking order in the Calgary Herald’s annual survey of the city’s best-paid executives for 2013.
…
Doug Suttles joined Encana Corp. in June and earned total compensation of $13.8 million despite getting only six months worth of base salary (for $546,000). He was paid a one-time relocation allowance of $728,250 to move to Calgary but most of his gains came from $10.9 million in share-and option-based awards.
…
The next four places were occupied by CP ($48.7 million), Agrium ($37.8 million), Encana ($35.2 million) and Crescent Point ($29.9 million). [Emphasis added] Above slides from: A Historical Perspective of Hydraulic Fracturing [After speaking publicly about this and posting slides from this damning presentation, it was removed from the internet. It’s important, so in honour of Encana betraying Canadians and moving to Trumplandia (USA), it has been uploaded here Oct 31, 2019.] by Ralph W. Reatch, Jr., SEI, January 17, 2008 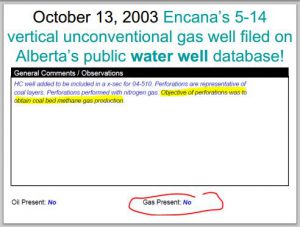 Regulator presentation by Manager Jim Reid (who wrote the November 24, 2005 banishment letter to Ernst, judging her making criminal threats without any evidence or pressing charges and violating her Charter rights) removed from the regulator website after it was linked to on the Ernst vs Encana legal case website. Ernst had saved a copy, and uploaded it for the public to have access to it. 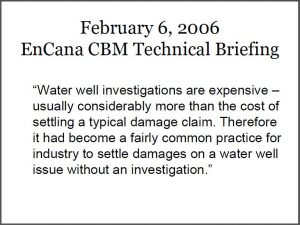