FDA issues warning about flammable wart removers by CTVNews.ca, January 16, 2014
Some cryogenic wart removers are flammable, the U.S. Food and Drug Administration said in a warning released Thursday. The FDA says it has received 14 reports since 2009 of over-the-counter wart remover products catching fire during use at home, harming consumers or setting items on fire. Singed hair, blisters, burns and skin redness were side effects described by 10 patients, said FDA nurse consultant Karen Nast. “The labeling for these products clearly states that they are flammable and should be kept away from fire, flame, heat sources and cigarettes,” Nast said in a news release on the FDA’s website.
…
The product, which is a mixture of liquid dimethyl ether and propane, is encased in a small, pressurized canister. The dispenser releases the mixture onto an applicator before being applied to the wart. The FDA says the dispenser generally caught fire when it was releasing the mixture. 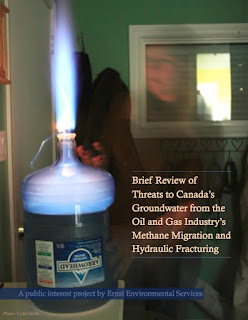 The incident occurred near Grande Prairie in northern Alberta when Crew Energy and GasFrac Energy Services workers failed to “recognize and properly assess a number of issues that led to the perforation and fracturing above the base of groundwater protection,” according to the report. Workers accidentally fracked directly into an underground water table after a series of mishandled errors resulted in a massively bungled frack job that injected 42 cubic metres of unrecoverable propane gel into an aquifer some 136 metres below ground.
…
The accident, documented in detail in ERCB’s 19-page report, violated the favoured gas industry assurance that fracking will never occur above base groundwater depths. Oil and gas industry lobby group Canadian Association of Petroleum Producers (CAPP) insists on its public relations websitemorefactslessfriction.ca that fracking production pipes are “bound by rock and several hundred meters below the deepest fresh water aquifers.” [Natural Resources Canada] writes that “hydraulic fracturing is permitted only well below the deepest freshwater aquifers.”

Neither the ERCB nor Alberta Environment intends to fine Crew or GasFrac.

Curran says industry has long been obligated to disclose to the ERCB what is in the injection fluid, and Layzell says it is well known that water, carbon dioxide, nitrogen and propane are most commonly used. [Emphasis added]