Data collection and quake location mapping by Barb Ryan (will be updated, time permitting, as the quakes shake on):

Most recent earthquakes at Fox Creek:

AER – the “regulator” – has not updated their quake list since November 15, 2017. (None of the December quakes are listed http://www.aer.ca/documents/data/AGSseismicity.xlsx ) Chevron intended to directionally drill and frac under the Town of Fox Creek. The town has already suffered extremely expensive water quality and quantity problems. Chevron moved their bottom hole to town boundaries.

Will the AER ensure the protection of the community, families living there and workers? No. As usual, the legally immune, Charter violating, deregulating “regulator,” whose mandate no longer includes the public interest (as of 2013), will only serve and protect the quake causing companies. As the province’s economy comes out of recession, towns in the heart of Alberta’s oil and gas sector are starting to see investment begin to flow again. Tom Vernon has more from Fox Creek.

Tiny tremors caused by hydraulic fracturing of natural gas near the surface could be early signs of stressful conditions deep underground that could destabilize faults and trigger larger earthquakes.

Stanford geoscientists have devised a way of detecting thousands of faint, previously missed earthquakes triggered by hydraulic fracturing, or “fracking.”

The technique can be used to monitor seismic activities at fracking operations to help reduce the likelihood of bigger, potentially damaging earthquakes from occurring, according to the new study.

“These small earthquakes may act like canaries in a coalmine,” said study co-author William Ellsworth, a professor (research) of geophysics at Stanford’s School of Earth, Energy & Environmental Sciences. “When they happen, they should be viewed as cautionary indicators of underground conditions that could lead to larger earthquakes.”

Fracking involves injecting high-pressure fluid underground to crack open rocks and release the natural gas trapped inside. As the rocks crack, they produce tiny earthquakes that were typically too small to be detected – until now.

“In our study, you can actually see individual earthquakes occurring next to the section of a well that’s being fracked,” said Stanford PhD student Clara Yoon, lead author of the study published in the Journal of Geophysical Research.

In October 2010, residents near an Arkansas natural gas field were shaken by a magnitude 4 earthquake that was followed by two larger aftershocks in February 2011.

Scientists say these large earthquakes were caused by injections of wastewater from fracking sites into deep underground wells, and not by fracking operations closer to the surface.

“These were some of the first earthquakes related to shale-gas development to draw national attention,” Ellsworth said.

Earthquakes of magnitude 4 and higher have subsequently rattled Oklahoma, Texas and other gas- and oil-producing states.

Using an advanced data-mining algorithm developed by Yoon and her colleagues, the Stanford team conducted a retrospective analysis of seismic activity in Arkansas prior to the magnitude 4 event. The algorithm uses earthquake-pattern recognition to generate detailed records of seismicity.

The analysis tracked seismic events generated at production wells that utilized fracking and at deeper wastewater-disposal wells nearby.

“We were interested in how the sequence that led to the magnitude 4 earthquake got started,” Yoon said. “We looked at the earliest period of seismic activity in 2010, from June 1 to September 1, when wastewater injection was just beginning.”

When Yoon ran the algorithm on this dataset, she discovered more than 14,000 small, previously unreported earthquakes. By comparing the timing and location of the tremors with fluid-injection data provided by the state of Arkansas, Yoon was able to demonstrate that most of the earthquakes were the direct result of fracking operations at 17 of the 53 production wells.

“That was a surprise,” said co-author Gregory Beroza, the Wayne Loel Professor of Geophysics at Stanford. “It had been thought, and we thought, that early earthquakes in this area were related to wastewater injection. But we found that the majority were caused by fracking.”

Many of the fracking-induced earthquakes were also bigger and more persistent that expected – unusual properties indicating potential trouble ahead.

Earthquakes generated by fracking are typically no larger than magnitude 0. That’s equivalent to the amount of energy released when a milk carton hits the floor after falling off a counter. 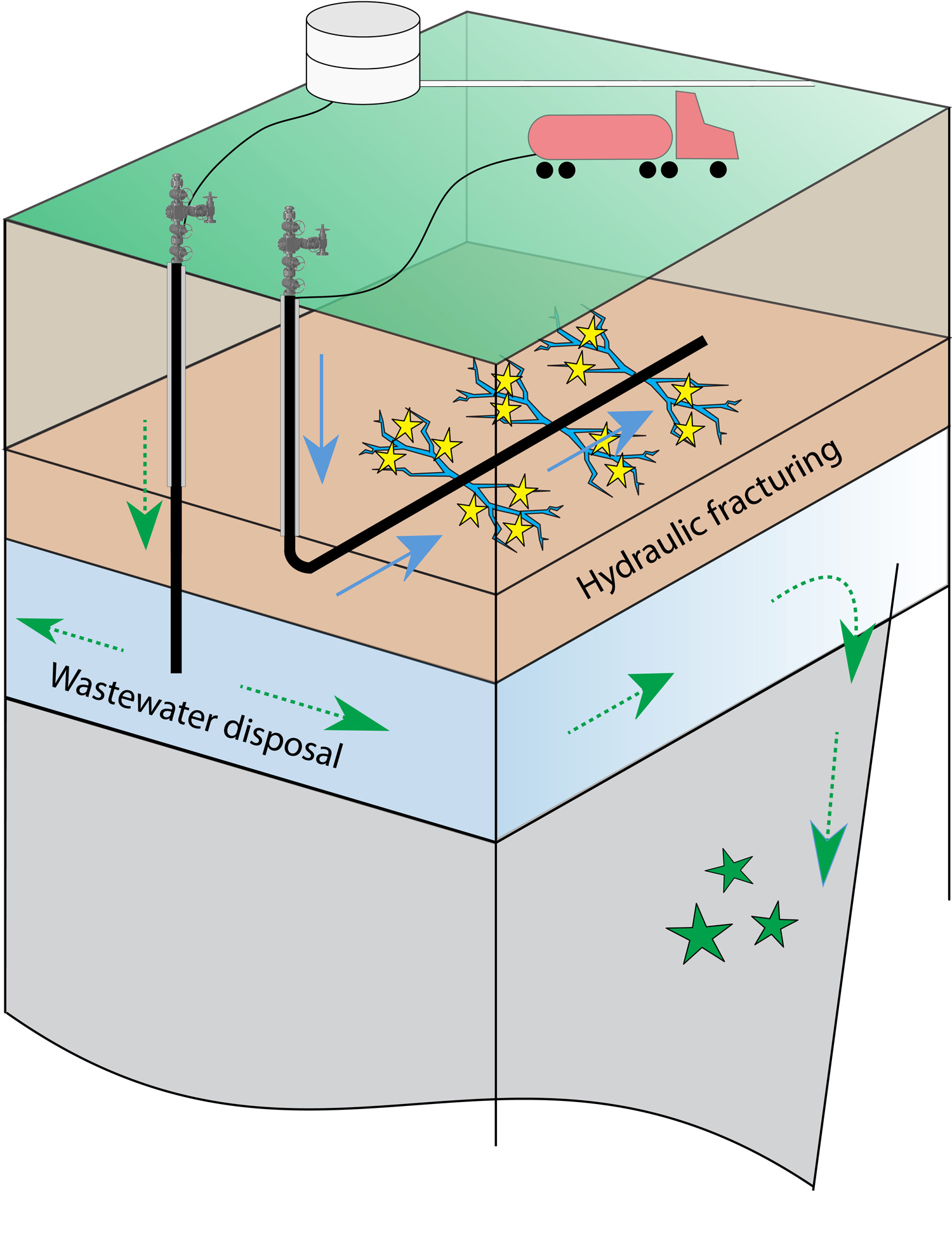 Most fracking-induced quakes occur near the well and dissipate quickly. But some of the Arkansas earthquakes were located far from the wellbore and continued weeks after fracking operations had ended.

“We were particularly surprised by the size and persistence of the seismicity,” Ellsworth said. “When earthquakes during fracking operations are larger than expected and persist for weeks, it indicates a high level of stress in that area. Faults under high stress are unstable and can slip, triggering larger earthquakes.”

The fact that fracking near wastewater wells induced thousands of earthquakes – too many, too big and lasting too long – was a red flag that stress conditions deeper down were also primed to create the instability that triggered larger earthquakes, he added.

“We want to encourage continuous seismic monitoring before fracking operations start, while they’re in progress and after they’ve finished,” Beroza said. “The algorithm Clara developed offers an efficient, cost-effective method for getting more information out of existing data, so that in the future informed decisions can be made that reduce the chance of larger earthquakes from happening.” [Emphasis added]

Former postdoctoral scholar Yihe Huang, now at the University of Michigan, also co-authored the study. Beroza and Ellsworth are co-directors of the Stanford Center for Induced and Triggered Seismicity(SCITS) at the School of Earth, Energy and Environmental Sciences.

Support was provided by SCITS and the National Science Foundation.

Abstract
We analyze the background seismicity, initiation, and earliest stages of the Guy-Greenbrier, Arkansas, earthquake sequence, which was potentially induced by wastewater injection starting in July 2010, during the 3 month time period 1 June to 1 September 2010. High-resolution observations of low-magnitude seismicity, and the high-quality Arkansas public well database, facilitate detailed analysis of spatial and temporal correlations between earthquakes, wastewater injection, and hydraulic fracturing. We detected 14,604 earthquakes, with magnitudes −1.5≤ML≤2.9, using two sensitive, waveform similarity-based event detection methods in parallel: Fingerprint And Similarity Thresholding, and template matching. We located the 1,740 largest earthquakes that form 16 spatially compact clusters, using P and S phases from 3 stations with the double-difference relocation algorithm and an improved velocity model constrained by the location of quarry blasts. We enhanced the temporal resolution of these event clusters by assigning smaller unlocated events to a cluster based on waveform similarity. Most clustered earthquakes during this time were both spatially and temporally correlated with hydraulic fracturing stimulation at several production wells. For one cluster, microseismicity was correlated with individual stages of stimulation. Many other wells had no detectable nearby seismicity during stimulation. We found a smaller number of events located on the Guy-Greenbrier Fault that were likely induced by wastewater injection. The concurrent presence of seismicity induced by hydraulic fracturing and wastewater injection presents a challenge for attribution and seismic hazard characterization, but the combination of precision seismology and high-quality well information allows us to disentangle the effects of these two processes.

2017 11 28: Yukon, Oklahoma: Fracking again directly causing earthquakes; Citizen Energy had to shut down, then cut back frac volumes by 50%

2016 10 17; Trilogy Adds to AER’s Fox Creek Frac’ing Free-for-all Pilot Project Failure: Trilogy’s Pipeline may have leaked ‘for a while’ before spill discovered

2016 04 04: why are frac’d Albertans so easily bribed by law violators and polluters? Why don’t groups in Fox Creek say “No thank you Chevron, We’d Rather Skate in Hell Than Take Your Money”

2015 11 15: More lies & frac fraud? Why did AER’s Darin Barter (now NEB) suggest trucks to blame for citizens feeling frac quakes at Cardson? Why not tell the truth? Why are regulators and “experts” so loath to publicly disclose fracing’s many public safety risks?

2015 09 18: How much has Fox Creek paid for hauled water? What happens when Fox Creek runs out of money? Will Encana step up like Bonavista was ordered to?

2015 06 16: Do we need another “independent” frac study? The AER asks: How far do we go? Fox Creek residents react to the latest 4.4 Magnitude quake

2015 02 02: Fracking Quakes Pose Added Risks but Oil and Gas Companies Refuse to Share their Collected Seismic Data. “In low seismic environments like Fox Creek where the natural earthquakes are infrequent, the hazards from an induced seismic event can exceed the hazards from a natural source”

2014 06 14: WARNING! Synergy and blanket approval to give industry free-for all fracking in Alberta! Watch out Fox Creek and the rest of Canada, Synergy is brainwashing controlled by industry, incredibly evil and works well

2014 05 05: Alleged groundwater pollution concerns by Trilogy at Fox Creek under investigation; Whistleblower: “cement job didn’t go as planned and there was NO cement in the hole” ]