Mr. Fox: Thank you, Mr. Speaker. Ann Craft is a constituent of
mine who’s been involved in a two-and-a-half-year fight with this
government over the contamination of her drinking water due to
oil activity close to her property. She has written dozens of letters,
made dozens of phone calls, and has had no satisfaction from this
government. This is about property rights and this government’s
lack of action to protect them. To the minister of sustainable
resource development: why, after two and a half years and dozens
of letters and phone calls, has this government continued to fail
my constituent?

Mr. Campbell: Well, thank you, Mr. Speaker. It’s the first I’ve
heard of this, but I am prepared to say this to the member. If he
gives me the name and the address and the phone number of the
constituent, I will personally give them a call, and we will sit
down and see what the issues are, and if we can resolve them, we
will.

Mr. Fox: Thank you, Minister.
Given that the enforcement of environmental concerns resulting
from the activity of the energy industry are now under the purview
of the Alberta Energy Regulator, will the Minister of Energy order
the AER to investigate and rectify the unacceptable conditions on
Ann Craft’s property?

The Speaker: The hon. Minister of Energy.

Mrs. McQueen: Well, thank you, Mr. Speaker. As the hon.
Minister of ESRD just said, I am also not aware of this incident,
but I’d be happy to find out the information from the hon.
member, if he’d like to share that with us, and to look at the
situation.

Mr. Fox: Thank you very much, Mr. Speaker. It’s evident that the
mail hasn’t been read in a couple of these ministries.
Given that the government has allowed Ann’s calls and letters
to go unanswered for two and a half years and given this issue of
property rights, environmental protection, and, quite frankly, a
serious public health concern, do the ministers understand why
Albertans have completely lost confidence in you, your
government, and in the new Alberta Energy Regulator?

Mr. Campbell: Mr. Speaker, I take great offence to the member
opposite saying that we don’t return letters or answer phone calls.
The people in our department are very conscious about the
environment, and they’re very conscious about the work they do. I
will say to you that if a letter was written or if a phone call was
made, I would say that those phone calls would be returned. Let
me say that we don’t always agree with the people on the other
end of the phone. The answer might be no, so that person may not
be happy. But I will commit personally that I will deal with this
issue, and I will talk to that constituent. We’ll come to a resolve
on the issue.

The Speaker: Thank you 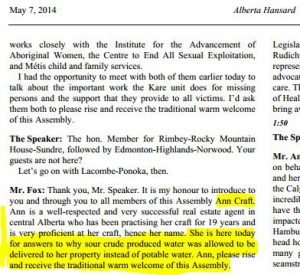 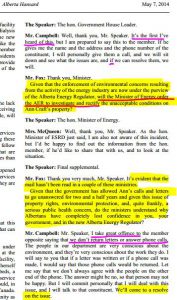 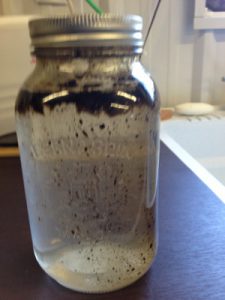 FrackingCanada: Who votes for this? Case Closed! Ponoka ranchers, the Campbells, get nowhere after 8 years of drinking water contamination and investigation 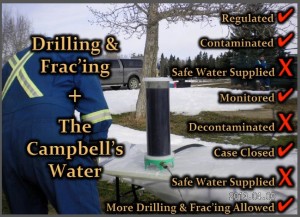