Gana and Gwi Bushmen: 14 years without access to regular water supply after Botswana government cemented their only water borehole

Bushmen are not ‘poachers’ – wildlife conference protest by The Ecologist, February 13, 2014
The anti-poaching conference in London today was disrupted by protests at the Botswana delegation – who call the indigenous Bushmen of the Kalahari ‘poachers’ and are forcing them into death camps. Loud protests at an anti-poaching conference in London today highlighted the devastating impact of a hunting ban on Africa’s last hunting Bushmen in Botswana – attended by Ian Khama, President of Botswana, alongside Prince Charles and Prince William. …

Official persecution
Botswana is persecuting the Bushmen of the Central Kalahari Game Reserve in the name of wildlife conservation by stopping them from hunting game. But the Bushmen pose no threat to the wildlife of the CKGR, alongside which they have lived sustainably for centuries. The Botswana government’s hypocrisy was recently exposed by revelations that large parts of the CKGR have been leased out for fracking, and a mine by Gem Diamonds is projected to start operations inside the CKGR in October 2014.

A 2006 high court ruling confirmed the Bushmen’s right to live and hunt in the CKGR, but the government continues to intimidate, torture and arrest Bushmen for hunting. The majority of Bushmen are forced to apply for restrictive permits to enter their ancestral land in the CKGR – a policy which has been likened to the hated Pass Laws under apartheid South Africa. A high court judge involved in the 2006 court case said that the government’s refusal to allow the Bushmen to hunt “was tantamount to condemning the [Bushmen] to death by starvation.” Survival has launched a travel boycott of Botswana and an ad campaign highlighting the government’s drive to deport the Bushmen from their land. The boycott has been supported by thousands of travelers and by celebrities Gillian Anderson, Quentin Blake, Joanna Lumley, Sophie Okonedo, and Mark Rylance.

Sheer hypocrisy
Survival’s Director Stephen Corry said today: “President Khama should not hide the persecution of the Bushmen behind the mask of conservation. To ban the Bushmen from hunting while at the same time opening up the reserve to fracking and mining is sheer hypocrisy.” The CKGR was established in the 1960s in order to protect the Bushmen’s land and the wildlife they depend on. But in three brutal clearances between 1997 and 2005, the Bushmen were evicted from their land. [Emphasis added]

The Bushmen by Survival International
Although the Bushmen won the right in court to go back to their lands in 2006, the government has done everything it can to make their return impossible, including cementing over their only water borehole; without it, the Bushmen struggled to find enough water to survive on their lands.

The Bushmen launched further litigation against the government in a bid to gain access to their borehole. Although their application was initially dismissed, in January 2011 Botswana’s Court of Appeal ruled that the Bushmen can use their old borehole and sink new ones in the reserve as well. The judges described the Bushmen’s plight as ‘a harrowing story of human suffering and despair.’

At the same time as preventing the Bushmen from accessing water, the government drilled new boreholes for wildlife only and allowed safari company, Wilderness Safaris, to open a tourist camp in the reserve.

The Kalahari Plains Camp was opened after Wilderness Safaris entered into a lease with the government. However, the lease made no provisions for the rights of the Bushmen on whose ancestral lands the camp sits, nor were they consulted about the venture. While Bushmen nearby struggle to find enough water to survive on their lands, guests can sip cocktails by the camp’s swimming pool. …

In 2002 the Bushmen took the government to court. They wanted the court to rule that their eviction was illegal. Due to procedural wrangling, evidence did not start to be heard until 2004.

Although the Bushmen are Botswana’s poorest citizens, the case became the longest and most expensive in the country’s history.

239 Bushman adults put their names to the case, and another 135 adults asked to be added to it. Together with their children, they represented around 1,000 people. (Of the original 239 Bushmen, 12% died awaiting justice.)

While the case continued, many Bushmen tried to return to their homeland in the reserve. Nearly all were evicted again by the government, some of them for the third time. During the case, the key clause protecting Bushman rights in Botswana’s constitution was removed by the government. Through the generosity of its supporters, Survival helped the Bushmen bring their case. On 13 December 2006 the Bushmen won an historic victory. The judges ruled that their eviction by the government was ‘unlawful and unconstitutional’, and that they have the right to live inside the reserve, on their ancestral land. …

In 2010 the Bushmen took the government to court again in a bid to access water inside the reserve. The judge dismissed their case, but in January 2011 Botswana’s Court of Appeal overturned the decision and condemned the government’s ‘degrading treatment’ of the Bushmen.

Two successful court cases have not deterred government attempts to uproot the Bushmen from their land. In 2013, the Bushmen again returned to the court to demand free access to the reserve, abolishing the government’s one-month permit policy. But at the last minute, the Bushmen’s long-standing lawyer, British barrister Gordon Bennett, was barred from Botswana. Their case was subsequently dismissed, and the Bushmen are now left without the legal representative of their choice, in stark contravention of international law. [Emphasis added] 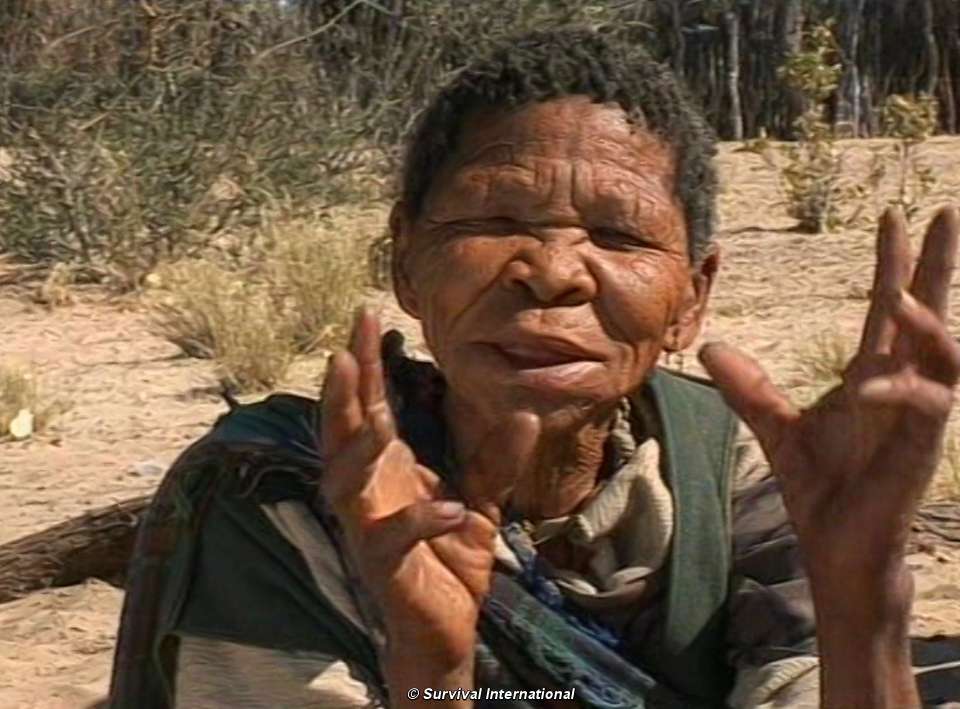 As the world marks World Water Day, the Gana and Gwi Bushmen of Botswana are marking eight years without access to a regular supply of water in the Central Kalahari Game Reserve.  In 2002, the Botswana government cut off and sealed a borehole, which the Bushmen relied on for water, in an attempt to drive them out of the reserve. Despite the Botswana High Court’s 2006 ruling that the Bushmen have the constitutional right to live in the reserve, the government has refused to allow them to re-commission their borehole, even though they have offered to raise the costs themselves. At the same time as forcing the Bushmen to make 300 mile round trips to fetch water, the government has allowed the opening of a safari lodge in the reserve, complete with a swimming pool for tourists, and has drilled new boreholes for wildlife only.

The government’s treatment of the Bushmen was recently condemned by the UN Special Rapporteur for indigenous peoples, who accused it of falling short of ‘the relevant international human rights standards’. He also found that those Bushmen who have returned to the reserve ‘face harsh and dangerous conditions due to a lack of access to water’ and urged the government to reactivate the Bushmen’s borehole ‘as a matter of urgent priority’. Since the ruling, many Bushmen have returned to their ancestral lands inside the reserve. However, without access to their borehole, they face severe water shortages; at least one woman has died from dehydration since the borehole was cut off. Many more languish in the resettlement camps where they were dumped by the government, anxious about returning to their lands without access to a regular supply of water.

Over 2,000 days since their water supply was cut off, the Bushmen have now launched legal proceedings against the government in a bid to gain access to their borehole. Survival’s director, Stephen Corry, said today, ‘The government’s continued refusal to allow the Bushmen access to their borehole is nothing short of malicious. All the Bushmen want is to be able to use their borehole as they did before they were illegally evicted from their lands. How can Botswana call itself ‘a shining light’ of democracy when it is denying its oldest inhabitants their fundamental right to water?’ [Emphasis added]