Just a Fracking Few and Rosebud, Not Our Problem, Alberta Environment Minister McQueen says no need for baseline water testing yet because “There have been very few wells” fracked

‘Just a Fracking Few’ and ‘Rosebud, Not Our Problem’ in Alberta Views, July/August 2013 Print Issue Alberta Environment Minister Dianna McQueen, November 29, 2012: There have been very few wells drilled in this province with hydraulic fracturing, and that’s why we’re taking the time with industry, with the regulator, ERCB, with the Department of Energy…to make sure that we get this right…. [Emphasis added] 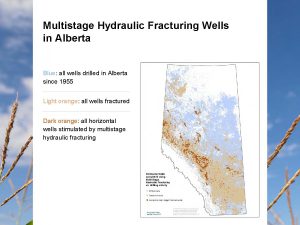 Map presented by the ERCB March 14, 2013 at “The Fracking Truth” Expert Panel in Calgary. 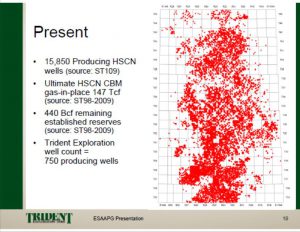 Alberta Horseshoe Canyon coalbed methane wells by 2006 (each square = Township x Range = 6 x 6 miles). Conventional and other unconventional wells are not included on this map, nor are all CBM wells (the blue points to some of the contamination cases discussed in this brief). Adopted from Trident Exploration Corp: The Horseshoe Canyon Coals of Central Alberta – A Dry CBM Play

One of Trident’s Keys to production: “High rate N2 fracture of each seam” ]

Rosebud, Not Our Problem is from Andrew Nikiforuk’s article in The Tyee.ca, How Alberta Will Fight Fracking Folk Hero Jessica Ernst, In famous flaming water case, regulator to argue ‘no duty of care’ to landowners or groundwater