Lakes in 1,000 sq km surrounding Yellowknife contaminated with arsenic, methyl mercury years after mine closure: “There are real impacts on communities and on the greater landscape as well”

Lakes near Yellowknife contaminated with arsenic, mercury years after mine closure by Ivan Semeniuk, April 6, 2016, The Globe and Mail

Arsenic and mercury are present in surprisingly and sometimes dangerously high levels in numerous small lakes surrounding the city of Yellowknife, NT, scientists have discovered. The contaminants form a toxic footprint around the northern capital that covers roughly one thousand square kilometres, an unwelcome and — until recently — unnoticed legacy of the now shuttered Giant Mine which is already the focus of a long and costly remediation effort. [What when country-wide frac pollution remediation costs are forced on Canadians so that they have water to bathe in and drink, after the callous multinationals walk and dump their legal responsibilities on taxpayers?]

In a newly published study, a research team based at the University of Ottawa makes the case that the lake contamination is linked to industrial emissions from decades past when gold-bearing ore was heated in a “roaster” on the mine site, releasing tonnes of unchecked arsenic-laden dust and other pollutants.

“We believe that the bulk of the contamination that we’re seeing is airborne,” said Jules Blais, a professor of environmental toxicology and senior researcher on the study. 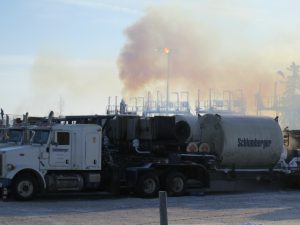 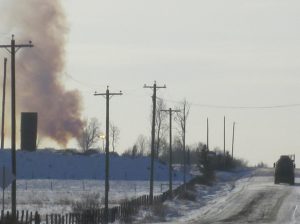 Photos of Alberta day and all night fracs above by FrackingCanada

Parallel investigations by scientists working for the territorial government have confirmed and augmented the Ottawa team’s findings, raising questions about the potential impacts on human health across a region that is home to half the population of the Northwest Territories.

Importantly, the findings to date reveal that the contamination is most concentrated in small lakes that are downwind of the Giant Mine and not linked to the watershed that supplies Yellowknife with drinking water.

The affected lakes primarily receive their water through precipitation and lose it through evaporation, providing no opportunity for lingering toxic chemicals to be flushed out. [If there was opportunity, wouldn’t the toxic chemicals be “flushed out” on communities/regions downstream?]

Nevertheless, researchers were startled after they began to sample the lakes in 2010. Their initial goal was to study the impact of climate change in the region, but as the results came in, the focus of the investigation quickly shifted.

“We saw arsenic concentrations that were higher than any we had seen anywhere,” Dr. Blais said.

In its study, published Wednesday in the open access journal PLOS ONE, the Ottawa team looked at 25 lakes near Yellowknife and found that in some cases the concentration of arsenic in lake water was as high as 136 micrograms per litre. That’s more than13 times the recommended limit for drinking water and 27 times the level deemed adequate for the protection of aquatic life.

The highest concentrations were found in lakes within 4 kilometres of the Giant Mine site.

Some 237,000 tonnes of arsenic trioxide dust are known to have been produced and captured during roasting operations at the mine prior to its 1999 closure. That material remains at the mine site where a permanent solution for its containment or removal remains an ongoing issue.

However, researchers estimate that some 20,000 additional tonnes of arsenic trioxide escaped into the air, the bulk of it before capture methods were put in place starting in 1958. Most of that airborne dust would have settled out within a 25 kilometre radius of the mind. Sediment cores taken from the lakes show that arsenic deposition was highest around the early 1960s.

But if the “aquatic” arsenic seen in the lakes today comes from the dust that was released so many years ago, researchers have yet to completely understand how it is transported through the environment. It is not clear, for example, whether the lakes are currently acting as “sinks” where arsenic is pooling from the landscape or as active sources from which arsenic is continually escaping.

Another surprising find relates to the elevated mercury levels in the lakes. Here the chief concern is not the total amount of mercury found but the unusually high proportion that occurs as methyl mercury, a compound that is more deadly to humans than mercury alone. In lakes nearest the mines roaster, up to 44 percent of total mercury is in this form. The Ottawa researchers posit that bacteria living off sulphur emissions from the mine are responsible for converting mercury into methyl mercury.

While environmental contamination from the Giant Mine, along with a smaller mine that closed in 1971, is not a new theme, most of the attention until now has been directed toward the mine sites rather than the surrounding region. [Just wait til the frac pollution remediation problems and costs roll in, including escalating cancers, and hormonal, neurological, skin and respiratory ailments …]

Mike Palmer, a scientist with the territory’s Department of Environment and Natural Resources, said that further work was underway to better understand the wide swath of historic pollution from mining activities in the region, including studies to test for the accumulation of toxins in fish and other species. [Humans too, or is that too scary for researchers to get funding for?]

Data from ongoing monitoring of 98 lakes by the territory has now been posted as an open file by the Northwest Territories Geological Survey.

“There’s really been a ramping up of research efforts,” Dr. Palmer said, adding that a clearer picture of the extent and activity of the contaminants would be essential for determining what kind of risk they may pose.

Adam Houben, a PhD student who is lead author on the study and who did much of the sampling and analysis of the lakes said the findings offer an example of the unforeseen consequences that can arise from resource development, much of which takes place outside of the public’s awareness.

“There are real impacts on communities and on the greater landscape as well,” Mr. Houben said.

“Arsenic and mercury are present in surprisingly and sometimes dangerously high levels in numerous small lakes surrounding the city of Yellowknife, NT, scientists have discovered.

The contaminants form a toxic footprint around the northern capital that covers roughly one thousand square kilometres, an unwelcome and — until recently — unnoticed legacy of the now shuttered Giant Mine which is already the focus of a long and costly remediation effort.”

This is exactly why we need strenuous environmental studies before any shovel goes in the ground, vigorous regulation of planning, regular and thorough inspection of operations, and surety bonds put up by the owners of such operations, sureties that are returned to the owners after a final, post-shutdown inspection determines that the sire is cleaned and restored to a reasonable representation of what it was pre-development.

Anything less, going forward, is unacceptable. [But, we’ve had nothing but heaps of talk (promises promises promises) and massive deregulation and rights decimation across Canada, to enable coast to coast to coast frac harms and tarsands devastation that multinationals and our politicians intend hanging on the people]

Why should the taxpayers have to pay to do an expensive clean-up when those who profited have gone off, scot-free, with their profits fattened by shoddy environmental practices?

spectator3
So “a long and costly remediation effort” – paid for by – yes, the taxpayers.

Coachrich
Taxpayers are paying for the clean up as numerous weak kneed [and industry owned and controlled corrupt] politicians and bureaucrats did squat. Those politicians, bureaucrats, company management and company BODs should have been sued and prosecuted by now. The is no joke!!!!

Barley5 1 minute ago
I lived in Yellowknife in ’75. We were told that the arsenic level in the ground was 16x the safe level. If they knew how bad it was back THEN why in hell was that mine allowed to continue operation? The government is complicit in this

Jimbo5
Now, multiply this relatively small pollution hot spot by a million times and that will give us an idea of what we as a species have done to poison ourselves and our tiny planet.

Loon-A-Tick
… Why didn’t this conversation happen 30 years ago. … [Emphasis added]