Natural gas from coal in Alberta Position Paper, CAPP doesn’t like the name coalbed methane or hydraulic fracturing referred to as an experiment. Too bad for them (lying bullies).

Posted on September 1, 2003 by Jessica Ernst

Natural gas from coal in Alberta Position Paper by the Canadian Association of Petroleum Producers, September 2003

[Paper removed by CAPP, so uploaded to this website for the public interest] 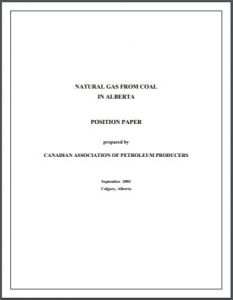 In order to more accurately reflect the fact that coalbed methane is simply a form of natural gas and will be developed in a similar manner, CAPP recommends that “coalbed methane” be referred to as “natural gas from coal.”

2. The Act should be amended to declare that NGC is natural gas and should explicitly state that it is retroactive.
…
EUB should be more critical in its assessment of whether a party will be directly or adversely affected in deciding whether the party should be given standing regarding a particular application
…
EUB should allow the technical details within applications for holdings to be kept confidential for a period of two years.
…
CAPP recognizes that the handling and disposal of produced water, whether by treatment and release to the watershed or subsurface disposal, must be carefully planned. … If usable water is encountered, restrictions on its production and use are imposed by current Alberta Environment regulations for conservation purposes. For example, usable water production from an aquifer is limited to one producing formation (or coal seam) at a time and is subject to pressure drawdown restrictions. These limitations make it impractical to attempt to depressure a target coal group to achieve commercial volumes of NGC production. CAPP recommends that under circumstances where usable water was intended to be produced for the purpose of depressuring coals to produce NGC, that a multi-ministry, “one–window” approach be developed for licensing and regulation through the EUB.
…
There are an increasing number of stakeholders that have been raising questions and concerns about the development of NGC. … There also seems to be a misconception held by some people that the designation of a project as “experimental” means that it poses a higher risk to the public. CAPP, along with other key government and community stakeholders (e.g. EUB, DOE, and the Alberta Departments of Sustainable Resource Development and Agriculture, Food and Rural Development) should develop a consolidated public education and consultation campaign to clarify the issues surrounding development of NGC. Such a campaign would have to engage community members and municipal governments that may be impacted by NGC development, as well as the media. The challenge will be to create an awareness of the fact that NGC simply involves the exploration and production of natural gas in a different reservoir situation, namely a gas reservoir in a coal seam, and requires different production techniques.
…

27. CAPP will develop and implement a consolidated public education and consultation campaign in coordination with the Canadian Society for Unconventional Gas (CSUG) and other key government and community stakeholders.

There are currently about two dozen pilot projects to develop CBM across the WCSB and some participants noted that about 1,000 CBM wells will be drilled this year, resulting in an expected 100 MMcf/d (2.8 million m3/day) of production.  While it is too early to accurately assess this emerging supply source, the Board’s scenarios for CBM supply also indicate about 100 MMcf/d in 2004, consistent with actual production to-date.
…
To-date, there has been mixed success.  In attempting to develop CBM, some projects have experienced fresh or salt water production which presents additional challenges with water disposal and tends to increase costs and impact gas production.  Other projects have focused on dry coals that produce gas with no water.  Considering the variability of coals, the range of success amongst existing pilot projects, and the very early stage of CBM development in Canada, there is still significant uncertainty surrounding the future of CBM development.

The Horseshoe Canyon play in south-central Alberta was described as an example where developments have been positive.  Ultimately, some 50,000 wells may be needed to recover the CBM from this area alone.  The drilling risk in CBM development is relatively low due to the widespread deposits of known gas resources and drilling programs typically involve a large number of wells and high drilling density to achieve economies of scale.

Yup, frac’ing is an experiment, a brute force and ignorant one, whether in coal or shale.