No wonder Canada’s legal system slithers around in Hell: ‘Knees together’ ex-judge Robin Camp should be able to practise law again, his lawyer argues

Why is Alberta media giving so much attention to a fallen from grace ex judge that Harper made so powerful?

Why no reporting on the recent 3.8M earthquake and others in the frac frenzy at Fox Creek?

’Knees together’ judge should be able to practise law again, his lawyer argues by The Canadian Press, January 4, 2018, Calgary Herald

The lawyer for a former judge who asked why a rape complainant didn’t resist by keeping her knees together is arguing that a “lack of sensitivity” at the time is no reason to prevent Robin Camp from rejoining the legal profession. [What a dastardly way to diminish the harm Camp caused to women in general with his misogynistic demeaning behaviour in court. Is Mr Alain Hepner an abuse enabler? What’s he really up to?  Trying to get Robin Camp back into the legal fold, or propagandizing his heinous conduct to make the public accept it? Why is the Calgary Herald giving the awful ex-judge (via his lawyer) a megaphone?]

Alain Hepner has filed his final written submission to the Law Society of Alberta on behalf of Camp, who stepped down from Federal Court in March following a Canadian Judicial Council recommendation that he be removed from the bench.

The council called Camp’s behaviour during a 2014 sexual assault trial “profoundly destructive” and said it undermined public confidence in the judiciary.

Camp — a provincial court judge in Calgary at the time — called the complainant “the accused” numerous times and asked her why she didn’t resist the alleged assault by keeping her “knees together.”

He found the accused not guilty. The Appeal Court ordered a new trial in which the man was again acquitted. [Who trusts Alberta’s Court of Appeal or the judges appointed to it?Law violating corporations and their enablers, and apparently sexual predators, do well by it decimating the court’s credibility]

Now 65, Camp told a law society hearing in November that he has another “five or 10 good years” and planned to steer clear of criminal law. [Plans can change in an instant, eg, soon as Camp is made a lawyer again.]

“The sole issue before this panel is whether Mr. Camp should be reinstated as a member of the Law Society of Alberta, with an emphasis on the public confidence in regulating our own profession,” Hepner wrote in his submission which was obtained by The Canadian Press.

“His transgressions related to a lack of sensitivity and knowledge in the area of sexual assault did not evidence a lack of good character or dishonesty or other objectionable conduct.” [It’s highly doubtful any Canadian judge would be punted from the bench for merely being ignorant and an insensitive bully]

The law society is still mulling over Camp’s application.

Hepner says Camp accepted responsibility for his actions from the day the controversy surfaced. [What a slithering lie the Herald published! Camp demanded another hearing after the judicial council recommended he be removed from the bench, massive costs which he does not have to pay for, the public does! That’s clear evidence of refusing to accept responsibility, and a nasty lack of remorse.] He said Camp apologized immediately to his colleagues and has worked diligently since then to better himself. [Legal Dance in the Ballroom of Hell? Camp didn’t harm his colleagues, he harmed women and the non-legal public with his belittling nasty comments in court. Such nastiness doesn’t just vanish after being punted from the bench and muttering a few half-assed apologies]

“Mr. Camp came to understand and accept that his questions and comments during … the trial were often insensitive and failed to show adequate regard for laws to protect the disadvantaged. He then apologized publicly,” Hepner wrote. [And now he wants to make money in the legal industry again? He ought to be given a legal licence to clean toilets in a prison where he might learn about sensitivity]

“This panel must determine if Mr. Camp’s conduct at the trial is an event so egregious as to override the uncontroverted evidence attesting to Mr. Camp’s career-long body of work, and his reputation for credibility, integrity, character and competence.” [His reputation now fabricated by his lawyer?]

Hepner also noted that Camp’s misconduct was unique because he was a judge at the time and could not be repeated again since he stepped down from the bench. [Really?  Being made a lawyer puts Camp right back into a position of power, easily able to harass and or abuse those less powerful than him, such as women and minorities of which there are many in Alberta. Abuse/misconduct by legal industry persons does not just happen on the bench!]

Camp told the panel in November that he believes he’s a better person now, having taken steps to educate himself on the history of sexual assault law in Canada and to correct previous biases.

He said he has taken on three counsellors to help guide his legal and personal development.

“I was a caricature. Many people in Canada reviled me,” Camp said. “I learned I wasn’t as clever as I thought I was. I learned I didn’t know as much as I thought I did – I learned why the question I asked had been so hurtful.” [Emphasis added]

Ed Henderson · Uk
It would be interesting to watch him in any Court defending an accused before any Judge that respects women. This can happen in Civil Court as easily as in a Criminal Court.

Patriarchy and misogyny are rampant in the legal profession, and likely sexual harassment and abuse. https://t.co/9lGmtPABmv

Snaps of the tweeting between Alberta lawyer Avnish Nanda and Spencer Keys: Thanks for the PSA @TabathaSouthey. I followed this account but had never seen this kind of abusive, misogynistic crap until you pointed it out. I’ve now unfollowed and I urge all my lawyer colleagues to do the same – and to invite your followers to do so as well.

I see some actual lawyers follow @CanLaw, Wtf, lawyers? And remember this little chain the next you hear someone ask “Why don’t women report?” or “Why don’t more women run for office?” or “Why aren’t you on @Twitter anymore?” 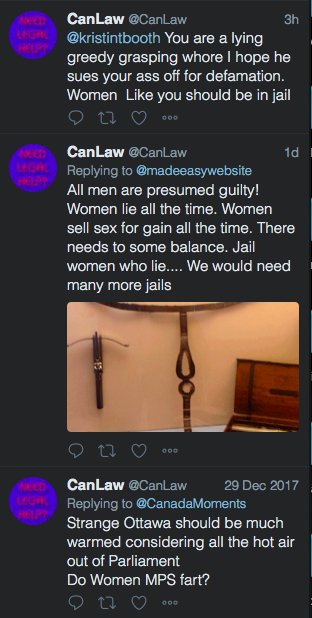 An interrogation of sexual assault law and a legal process that traumatizes complainants.

Over the past few years, public attention focused on the Jian Ghomeshi trial, the failings of Judge Greg Lenehan in the Halifax taxi driver case, and the judicial disciplinary proceedings against former Justice Robin Camp have placed the sexual assault trial process under significant scrutiny. Less than one percent of the sexual assaults that occur each year in Canada result in legal sanction for those who commit these offences.

Survivors often distrust and fear the criminal justice process, and as a result, over ninety percent of sexual assaults go unreported. Unfortunately, their fears are well founded.

In this thorough evaluation of the legal culture and courtroom practices prevalent in sexual assault prosecutions, Elaine Craig provides an even-handed account of the ways in which the legal profession unnecessarily – and sometimes unlawfully – contributes to the trauma and re-victimization experienced by those who testify as sexual assault complainants. Gathering conclusive evidence from interviews with experienced lawyers across Canada, reported case law, lawyer memoirs, recent trial transcripts, and defence lawyers’ public statements and commercial advertisements, Putting Trials on Trial demonstrates that – despite prominent contestations – complainants are regularly subjected to abusive, humiliating, and discriminatory treatment when they turn to the law to respond to sexual violations.

In pursuit of trial practices that are less harmful to sexual assault complainants as well as survivors of sexual violence more broadly, Putting Trials on Trial makes serious, substantiated, and necessary claims about the ethical and cultural failures of the Canadian legal profession. [Emphasis added] 2017 12 14: Unprecedented yet far too late: 7 police agencies in Canada will let experts in sexual violence study uncensored case files on unfounded or inactive sexual assault investigations, “Right now, there is a bit of crisis across the country concerning victims’ confidence in the criminal justice system.” Surely they jest! “Justice” System? What “Justice?” There’s no confidence in Canada’s civil legal system either! Who’s going to investigate that? ]