New York signs law prohibiting fracking, and oil, natural gas waste in city; Alberta & other jurisdictions allow it dumped in landfills, on roads, leases, near communities and water ways (perhaps in them, who’s checking?). NORM increasing because of unconventional oil & gas, “has become a much more significant health, safety and environmental issue”

Posted on September 2, 2016 by Jessica Ernst

De Blasio signs Levin bill to ban fracking products, Council member says it will safeguard water supply by Paula Katinas, September 2, 2016, Brooklyn Daily Eagle
….New York has become the first city in the country to ban the use of oil waste products obtained through the controversial process of hydro-fracking.

Mayor Bill de Blasio signed into law a bill prohibiting the use of oil and natural gas waste products in the city.

The products are often used to de-ice roadways in the winter, officials said.

The bill, which was sponsored by Councilmember Stephen Levin, seeks to protect New York City communities from toxic pollutants while at the same time safeguarding the water.

… The waste associated with hydro-fracking and other natural gas and oil extraction processes often contains radioactive elements like radium, carcinogens such as benzene, and other chemical additives, according to Levin, who said that without adequate protections in place, pollutants could leak into the drinking water.

The mayor signed Levin’s bill on Aug. 31. The new law will go into effect 90 days from that date.

“This legislation will protect New York City communities from toxic pollutants and ensure cleaner water for generations to come and I hope that other legislative bodies will follow suit. All New Yorkers will benefit from their steadfast commitment to protecting our environment,” Levin said in a statement.

Sean Dixon, the staff attorney for Riverkeeper, the organization that looks after the Hudson River, called the legislation a milestone.

“In the absence of a statewide ban, several New York’s municipalities have stepped up, prohibiting these toxic oil and natural gas wastes in their wastewater treatment plants, water bodies and landfills, and have banned its use to de-ice roads. Now, we applaud the New York City Council for extending these same protections to its 8.5 million residents and their roads, parks, waterways and environment,” Dixon said.

Specifically, the city’s new law will:

Ban the application of any oil or natural gas waste upon any road, property or landfill located within the city.

Require all city contracts for the construction or maintenance of a city road to include a provision stating that no materials containing oil or natural gas waste will be used.

“This type of hazardous substance does not belong in our landfills. This legislation helps us keep our environment clean and maintain our public health,” he said.

SECURE’s Pembina Landfill is located north of Drayton Valley at SE-18-050-11W5M. NORM disposal questions can be directed to Tab Cuthill at 1-855-359-2357 or emailed to email hidden; JavaScript is required.

Naturally Occurring Radioactive Material (NORM) in the oil and gas industry as a result of unconventional multi-stage horizontal fracturing into shale deposits.

SECURE Energy Services’ Class I Hazardous Waste Landfill near Drayton Valley, Alberta was recently granted regulatory approval and licensed for NORM disposal. This is the first and only licensed NORM disposal facility in Alberta.

Shale deposits have higher levels of Uranium and Thorium source material than other sedimentary rocks. Uranium and Thorium decay products include Radium-226 and Radium-228 isotopes. These isotopes are soluble and brought to surface in production water and fracture flow-back fluids which then precipitate out and concentrate as radioactive scales and sludges.

… The remediation of NORM impacted flare pits, waste ponds and contaminated soils with these higher levels of radium require specialized handling, waste treatment and disposal options. One of the key aspects of successfully completing a remediation project involving radium impacted waste is to have a NORM Exposure Control Plan which meets the requirements of provincial Occupational Health and Safety Regulation in protecting workers from overexposure of NORM and ensuring that the site is surveyed and tested below Unconditional Derived Release Limits for diffuse NORM sources at the end of the project. This means having appropriately trained and qualified personnel and survey instrumentation on location to provide documented NORM Awareness Training to third party contractors, establishing control areas to restrict access and minimize the spread of contamination, decontaminating third party equipment prior to release and ensuring that all waste leaving location is properly packaged, manifested and transported to licensed facilities. [In reality, how often does that happen in Alberta or Saskatchewan?]

A SECURE NORM technician is conducting a NORM screening survey on down-hole tubing and equipment prior to release from location.

As NORM impacted volumes grow, one of the key management issues for NORM remediation projects is the lack of licensed and approved disposal options for NORM waste. In Western Canada, up until July 2016, there was only one licensed landfill in British Columbia capable of handling solid NORM waste, however, this landfill is restricted to very low levels of Radium 226 which often does not meet the needs of shale play remediation projects. In terms of NORM impacted liquids and sludges, licensed disposal is limited to two salt caverns in Saskatchewan.

The lack of approved NORM disposal facilities often prevent oil and gas operators from finding a suitable disposal option for NORM impacted waste streams. As a result, NORM waste is either being transported extremely long distances across provincial jurisdictions or the waste is sent to unlicensed waste processing facilities that do not have trained personnel to monitor and manage the NORM waste. [Third option? Dumped on foodlands, roads and in waterways?]

[Why did Alberta Oil Magazine post no credit for who created the above map? It’s missing numerous oil and gas areas with NORM, notably in central and south central Alberta, eg, the Fish Scale Shales targeted by Encana (and now likely Ember, because Encana sold most of its Chinook Business Unit to Ember) are reported by industry to be radioactive.]

To address this issue, SECURE Energy Services’ Class I Hazardous Waste Landfill (Pembina Landfill) near Drayton Valley, Alberta was recently granted regulatory approval and licensed for NORM disposal. This is the first and only licensed NORM disposal facility in Alberta. The Pembina Class I Hazardous Waste Landfill is engineered and designed to address the higher radium content being found in non-conventional shale plays and to ensure oil and gas operators have licensed and suitable disposal options.

Where can you dispose of NORM?

How is NORM regulated?

How is NORM detected?

Do we accept NORM from out of province?

What forms of NORM are accepted?

Didsbury landfill taking 120,000 tonnes of oil and gas industry waste contaminated soil to use as cover. What a way to take industry’s toxic waste and make taxpayers breath and pay for it! Think of the lungs of the dump workers and community’s children. BELOW, A FEW OF MANY EXAMPLES OF OIL AND GAS INDUSTRY WASTE DUMPING REALITY IN CENTRAL ALBERTA, ON FOODLANDS!

2011 Encana dumping its waste at Rosebud on cropland: 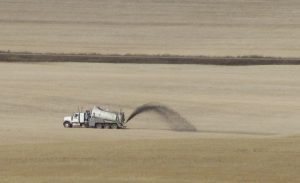 From this drilling operation under Ernst’s already frac contaminated land: The barn on Ernst’s property where her dangerously contaminated water well is. Encana illegally frac’d the community’s drinking water aquifers in 2004 while politicians and their staff (including current NEB Chair Peter Watson, then Deputy Minister Environment), the AER and Alberta Environment fraudulently covered it up and bullied and abused harmed citizens trying to shut them up. In Ernst’s experience, now Chair of the NEB Peter Watson was the nastiest of them all. 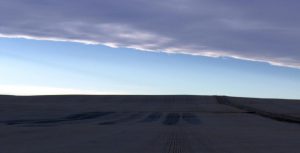 Encana dumping its waste in the same foodland field above

Below, photo just north of Calgary. All dumping blessed by the legally immune, bad faith and gross negligence operating, Charter violating, “No Duty of Care” AER?

With BTEX & hot by NORM?

State regulators are allowing nearly 4,000 tons of natural gas drilling waste to be used in a road project in north-central Pennsylvania. StateImpact Pennsylvania reports (http://n.pr/2bVa1fW) the Department of Environmental Protection has approved a plan from waste handler Clean Earth Inc. to use the materials on a road at the Bobst Mountain Hunting Club in Lycoming County.

StateImpact, a project of radio stations WITF and WHYY, says it’s the first time drill cuttings are being used in an area that is not an industrial site.

The waste dirt and rock from drilling deep underground may contain chemicals and naturally occurring radiation. Most ends up in landfills. [Emphasis added]

2006 09 08: BJ Services New Brunswick radioactive frac blowout document (Part 1 of 4), Corridor Resources put in mailboxes of landowners and concerned citizens Penobsquis, New Brunswick The BJ Services frac’ing equipment was in the final stages of the stimulation operation when a washout of a segment of the frac iron occurred (piping between the pump trucks and the wellhead). (Part 2 of 4) (Part 3 of 4) (Part 4 of 4)

2006 Spill site in Penobsquis New Brunswick is free of radioactive waste, says Corridor Resources An official with the Department of Environment said it has never had to deal with a radioactive spill before. It has handed the case over to the Canadian Nuclear Safety Commission. A spokesman for the commission said the company stated that it had disposed of the substance properly, but it hasn’t verified this claim by visiting the site.

2012 09 17: Hunt launched after Halliburton loses radioactive rod in Texas desert, Fears rod containing americium-241/beryllium could fall into hands of terrorists after employees of US oilfield services company lost it in transit between oil wells

2013 10 02: Dangerous levels of radioactivity found at fracking waste site in Pennsylvania, Hundreds of disposal sites for frac wastewater could be similarly affected

2014 02 25: North Dakota frac’d Bakken radioactive oilfield waste spilling out of trailers parked on rural land near Watford City: When the filter socks are “that orange color, we know they’re hot” 2013 04 23: Out Of Control: Nova Scotia’s Experience with Fracking for Shale Gas, Analysis Reserve Pit Sludge from Fracing for Radioactive Material

2014 02 24: Mr. Bob Willard with Alberta AER was on the Lethbridge City Council expert panel on urban drilling.  When a young lad asked about the waste, Bob said it will be put into tanks and likely hauled away to Pincher Creek. 2016 06 06: Federal Justice Donald Rennie: “Protection of the environment is, unequivocally, a legitimate use of the criminal law purpose.” Tarsands giant Syncrude loses court fight against rules

2016 06 15: Will waste water kill fracing? EPA bans disposal of frac waste at public treatment plants. Injecting it causes seismicity, recycling it is costly, using it to irrigate and landspraying it contaminates food, dumping it into waterways kills fish, pits filled with it leak, breathing it in aerosols corrodes lungs. What will companies do with it?