In Canada, no one’s studying it (of course not), but some citizens have documented it. 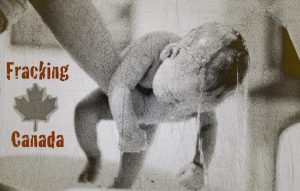 Radium has been widely spread on Pennsylvania roadways without regulation: Study by Kristina Marusic, May 30, 2018, Environmental Health News

Wastewater from the oil and gas industry that’s being spread on roadways to control dust and ice in at least 13 states, including Pennsylvania, poses a threat to the environment and to human health, according to a study released this week.

The wastewater, commonly referred to as “brine,” contains high levels of salt along with lead, radium, organic contaminants and other heavy metals in concentrations above safe levels for drinking water. Researchers have found that nearly all of the metals from brine leach out from roadways when it rains, and they speculate that the pollutants could wind up in nearby bodies of water and find their way into local drinking water sources.

“Even though the highest volumes of brine are being spread on roads in northwestern Pennsylvania, most of this activity is occurring within the Allegheny River watershed,” William D. Burgos, a professor in the Department of Civil and Environmental Engineering at Pennsylvania State University who co-authored the study, told EHN. “And the Allegheny River is the drinking water source for city of Pittsburgh.”

In their report, published in the journal Environmental Science & Technology, the researchers noted that in Pennsylvania from 2008 to 2014, spreading oil and gas wastewater on roads released more than four times more radium to the environment (320 millicuries) than was released from oil and gas wastewater treatment facilities, and 200 times more radium than spills. Some lead and radium was also found to settle into roadways.

Radium is radioactive and has been linked to bone marrow and lung cancer, while the health impacts of lead exposure range from lowered IQ levels and behavioral issues in children to kidney, brain and central nervous system damage in adults. The researchers also found that the levels of salt in the brine pose a threat to aquatic life, and that some of the organic contaminants showed potential toxicity outcomes in human cells that have been linked to liver cancer in animal experiments.

The brine, which is a byproduct of both fracking and conventional oil and gas drilling, is sometimes used to treat icy roads during the winter, but is more commonly used to control dust on unpaved roadways in the summer. An estimated 34 percent of roads in the U.S. are unpaved, and dust from these roadways contributes to almost half of the nation’s annual airborne particulate matter emissions, which causes cardiovascular and respiratory issues.

“We do know that dust isn’t good,” Nathaniel R Warner, another of the study’s co-authors out of Penn State’s Civil and Environmental Engineering department, told EHN. “It also causes health issues, so we do need to suppress dust. But we need to make sure we’re solving one problem while minimizing the creation of another.”

Previous research suggests that the use of brine may not actually be effective at controlling dust. [Nice way to cheaply dispose of industry’s toxic waste?]

Burgos and Warner were only able to track down one published study investigating the effectiveness of the practice, which found no statistical difference in the amount of dust being blown off roads that had been treated with brine and roads that hadn’t been treated at all. The authors of that study, which was conducted in North Dakota, speculated that brine doesn’t contain high enough concentrations of calcium and magnesium, which help bind dust together into clay and retain moisture.

“Our recommendations for moving forward include setting a limit on radioactivity, reducing the amount of organics, and frankly, testing whether brine even works,” Warner said. “If it doesn’t work any better than water at suppressing dust, maybe we just don’t need to be doing this.”

The Pennsylvania Department of Environmental Protection (PADEP) does require townships that want to use oil and gas brine on their roadways obtain a “certificate of analysis” that requires testing of the fluid for some chemicals, but the researchers said those tests are very limited and ignore some of the most concerning elements of the brining liquid.

“The number of analytes is really limited,” Burgos said, “and radium isn’t on the list at all.” He noted that none of the states that allow oil and gas brine to be spread on roadways currently require any radium analysis.

There are more than 200 commercially available dust suppressants, which likely undergo more rigorous efficacy, health and environmental testing than oil and gas brine. But they can cost up to a dollar a gallon, whereas the oil and gas industry generally provides townships with brining services for free since it’s the cheapest method of disposal available.

On May 17, the Pennsylvania Department of Environmental Protection (PA DEP) conceded that it shouldn’t have allowed hundreds of thousands of gallons of brine to be spread on dirt roads in Farmington Township in Warren County last year. The announcement came during an Environmental Hearing Board case that had been filed by a resident who claimed spreading the brine on roadways where Amish families walk and ride in open buggies was unsafe.

Moving forward, the DEP has indicated that brine will be reclassified as “residual waste” and that a stricter permitting process will be required before it can be spread on roadways. The researchers at Penn State University said they’d been in talks with the DEP about their findings, but did not think their study was directly related to that decision.

“Ultimately, these are really funding-driven decisions,” Burgos said. “If we want to fix this, we probably have to provide these townships with more funding for road maintenance.”

Do you walk with your children and pets on roads in your frac’d community?

Ohio regulator tested levels of Radium 226 and 228 in Nature’s Own Source/AquaSalina made with frac waste. It has been “cleaned,” sold to cities and at Lowe’s for years. Even “cleaned,” it exceeded USEPA Safe Drinking Water limits for combined Radium 226 and 228 by an average factor of 300 and exceeded discharge limits for effluent discharges as outlined in Ohio Administrative Code.

Yet another vile example of science being on humanity’s side, the law not.

A pair of residents who dwell north of Cochrane have voiced concern over how a section of road has been maintained by a Calgary energy company operating a hydraulic fracturing site in the area, more specifically, what is being used to treat the roadways.

Dan Thomas and Mike Ross have both expressed unease over what they have referred to as ‘very dark, brown or black-looking stuff’ being spread on Township Road 274 and Range Road 40 as a means of dust control.

Thomas, who is a member of the local coalition Cochrane Area Under Siege (CAUS), an organization that has voiced apprehension over the practice of ‘fracking’ in the region, said he approached one of the truck drivers last year who was spreading water on the road during a rainfall, and that the driver admitted that putting water on a gravel road while it was raining ‘did not make any sense,’ but that ‘they’ were making him do it.

… “It appears the haulers were trying to confuse the residents by dumping well fluids under the guise of water-based dust control,” Thomas claimed.

“It’s a heck of a mess out here,” echoed Ross, who owns an equestrian centre in the area. “The stuff coming out of the back of the truck is brown to black…it’s not just water.”

… Thomas, who is a former energy sector employee, added that produced water from a well site would certainly be highly saline, but he questions whether using it on the roads is legal, saying it often has trace or significant amounts of hydrocarbon in it. Hydrocarbon naturally occurs in crude oil and is an organic compound mixture of hydrogen and carbon.

Thomas said he believes that at this point, Lightstream is lying to area residents about what is being put on the roads near the company’s 14-25 site, and that the black stuff being used came from the well.

“These guys will do anything to look ‘green,’” said Thomas. “Ultimately, someone should test the material…that means the Alberta Sustainable Resource Development.”

New York signs law prohibiting fracking, and oil, natural gas waste in city; Alberta & other jurisdictions allow it dumped in landfills, on roads, leases, near communities and water ways (perhaps in them, who’s checking?). NORM increasing because of unconventional oil & gas, “has become a much more significant health, safety and environmental issue”

Will waste water kill fracing? EPA bans disposal of frac waste at public treatment plants. Injecting it causes seismicity, recycling it is costly, using it to irrigate and landspraying it contaminates food, dumping it into waterways kills fish, pits filled with it leak, breathing it in aerosols corrodes lungs. What will companies do with it?