Thank you doctors and nurses for your “Un-natural-gas.org” billboards (and for fighting Covid-19 and our cowardly politicians). “Natural gas has significant health impacts for those living close by the wells and for our global environment,” said Dr. Kevin Liang 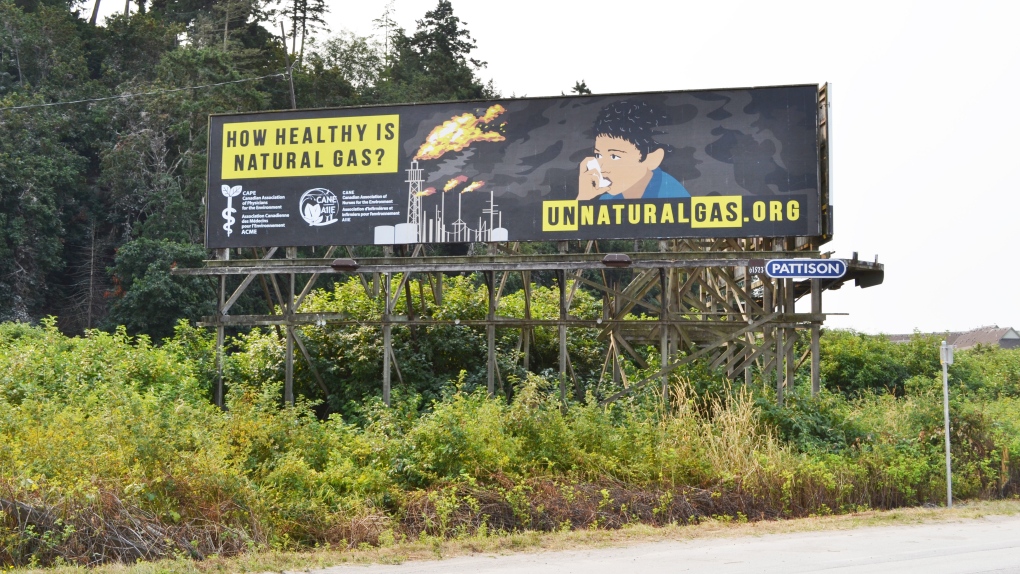 A billboard, for a campaign about the environmental and health impacts of liquefied natural gas, is seen near the Tsawwassen ferry terminal in B.C. in August 2021. (Photo: Dr. Melissa Lem)

VANCOUVER — A group of B.C. doctors and nurses, who are concerned about the impacts of natural gas and fracking, have purchased billboard space to spread their message.

“Natural gas has significant health impacts for those living close by the wells and for our global environment,” said Dr. Kevin Liang, a University of British Columbia family medicine resident and a member of the physicians for the environment society.

“(The concern) comes from seeing our patients being affected by climate change every single day – I’m a family medicine doctor in training, I’m a year away from being fully licensed, I’m already seeing the impacts of climate change, particularly this summer,” he said.

Hydraulic fracturing, commonly referred to as fracking, is a technique used to extract natural gas from shale rock.

“During the extraction and transportation processes, fracking and its infrastructure also pollute the air, land and water in the Peace region, use vast quantities of freshwater, overtake B.C.’s valuable farmland and worsen the health of families, farmers and Indigenous peoples locally and downstream,” reads a joint statement from the associations.

A few of the families living near frac’ing in NEBC

Liquefied natural gas pumped from wells across northeast B.C. fuels gas stoves, home heating and some B.C. ferries, but it is an “outsized climate-change culprit,” the statement continues.

The billboards are part of an advocacy and education campaign called Unnatural Gas, which seeks a moratorium on fracking expansion, a just transition for workers, a ban on natural gas hookups for new buildings starting in 2023 and an end to fossil fuel subsidies.

In an emailed statement from BC Ferries, public affairs director Deborah Marshall said the company would not comment.

“We don’t have any comment on the billboard,” she wrote.

Industry proponents have argued that natural gas is an environmentally-friendly alternative to coal, and that extracting and exporting natural gas to Asia would lower greenhouse gas emissions. However, critics, environmentalists and policy experts have long disagreed.

“LNG is energy intensive to move, requiring about 20 per cent of the gas to be consumed in the liquefaction, transport and regasification process,” reads a 2015 report from the Canadian Centre for Policy Alternatives.

“Coupled with life-cycle emissions of methane, which is a much more potent greenhouse gas than CO2, BC LNG imports to China would exacerbate emissions over at least the next 50 years compared to building state-of-the-art coal plants,” it continues.

Dr. Sandra Steingraber on IPCC AR6 Climate Report: “The science is clear: the fossil fuel industry needs to disappear from the face of the earth as soon as possible. … Promoting any expensive false solutions LIKE CARBON CAPTURE AND STORAGE is treachery.”

Pennsylvania Grand Jury Nails It: Hydraulic fracturing is poisoning us (AER & BC OGC are much more corrupt and industry-controlled regulators than PA’s DEP)

… A proportion (25% to 100%) of the water used in hydraulic fracturing is not recovered, and consequently this water is lost permanently to re-use, which differs from some other water uses in which water can be recovered and processed for re-use. …

Drought makes California cut water for 4,300 rights holders, some will be entirely without while oil companies continue to remove billions of gallons of water from the hydrogeological cycle via frac’ing, and inject toxic waste into protected aquifers.

Is LNG fracturing worth its weight in water?

Stealing billions of dollars from taxpayers and pensioners because investors and banks are wisening up to industry’s cons?

Pieridae unable to meet key conditions necessary to make final investment decision on LNG Goldboro in Nova Scotia, blames pandemic (the company has failed at getting financing for years). Did Canada say no to Pieridae demanding nearly a billion of our dollars? That money is better spent finding the disappeared Indigenous women and children and suing the criminal churches.

Wood MacKenzie: No US LNG export projects expected in 2021, making it second year in a row facilities don’t get built as sponsors struggle to secure long-term contracts, Some projects may die

Courageous feisty and wise Ireland! “Cork LNG is scrapped!” “Fracking and all of its effects has no place…. Not here, not anywhere.”

Why is LNG being pimped around the world to the tune of $Trillions as more and more investors & communities say no to frac’ing and fossil fuels? Calls into question motivations of gov’ts and companies–do they just want to assert power?

Down down down goes LNG!~ It “looks to be a damp squib.” In Permian Basin of West Texas and New Mexico, gas “prices have slid below zero…that means producers are paying others to take their supply.”

Nikiforuk writes his most powerful: Wet’suwet’en Raids: Canada Chooses Colonialism Again, A future of reconciliation is now squandered along with our billions propping up LNG.

Chevron biting frac ‘n LNG dust? Bites 400 more staff in Pennsylvania after cutting 150 staff there in 2014. Frac’ing is going the way Arthur Berman said it would – down into the gutter with tens of billions of dollars in losses; Banks, investors, investment firms running for frac-free hills.

Hanky Panky Power Pimping Codswallop! Canadian & BC gov’ts forcing demand for Site C dam? Why give the failing frac ‘n dash industry another near $Billion in corporate welfare? LNG & frac’ing, even electrified, are not green or clean or safe!

Nikiforuk: Canada’s Methane Leakage Massively Under-reported, Studies Find, New data shows ‘fracking and LNG industry is a much dirtier industry than it is made out to be.’

April 28, 2017, Vancouver Public Library, 7 – 9 pm: The Health Effects of LNG and Fracking, Event Organized by Canadian Association of Physicians for the Environment BC

British Columbians’ views on hydraulic fracturing have “hardened,” 61 per cent opposed; Opposition to LNG “up significantly”

Port Alberni, BC: Andrew Nikiforuk on LNG & fracking and Kimberly Mildenstein on her family living abused by hydraulic fracturing in Alberta