“The research is in: Stop fracking ASAP.” And, stop asking for regulations, responsible energy development, more study and fake, industry-controlled reviews. Asking for such enables more abuses. Time to say, “No, we are opposed!”

Such chanting gives consent. It gives industry and AER [Alberta Energy Regulator] (which is industry) their badly needed social license to operate, laughing all the way into intentional receivership with heaps of money in the secret bank, leaving the raped to clean up and hung with industry’s legal liabilities. This cartoon from the 2007 report by Justice D. W. Perras sums it up: 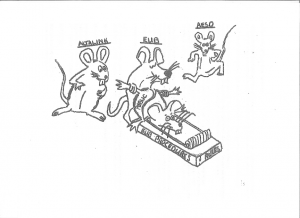 Communities confidently saying, “No, we are opposed!” stops industry’s social license to gang rape dead in its tracks. I’ve seen it time and time again.

There is no such thing as “responsible energy development.” Thankfully oil-soaked pioneers like Alberta, Texas, Pennsylvania, Oklahoma, Ohio, Colorado etc – are perfect examples of the rampant industry contamination, corruption and cover-ups, as well as the uselessness and irrelevance of numerous synergized groups and residents running around chasing their tails, while they continue to be abused and pounded to dust. This certainly serves other world communities well when they stand up with their seriously engaged and responsible governments to protect their citizens and communities – and ban this shit.

The research is in: Stop fracking ASAP by Barbara Gottlieb, Physicians for Social Responsibility, Aug. 1, 2019, Caller Times, Part of the US Today Network

Science. Evidence. Facts. Do these even matter anymore in U.S. policy? They should — especially when it comes to issues that affect our health and environment, like fracking.

Concerned Health Professionals of New York and my organization, Physicians for Social Responsibility, recently released a remarkable compendium of research on the subject. It summarizes and links to more than 1,500 articles and reports and has become the go-to source for activists, health professionals, and others seeking to understand fracking.

The new studies we looked at expose serious threats to health, justice, and the climate.

A 2018 study in the Journal of Health Economics, for instance, found that the babies of Pennsylvania mothers living within 1.5 miles of gas wells had increased incidence of low birth weight. Babies with low birth weight (under 5.5 pounds) are over 20 times more likely to die in infancy than babies with healthy birth weight.

Babies exposed in utero to fracking are likely to face additional challenges throughout their lives. They may suffer long-term neurologic disability, impaired language development and academic success, and increased risk of chronic diseases, including cardiovascular disease and diabetes.

Other researchers are finding that fracking wells and associated infrastructure are disproportionately sited in non-white, indigenous, or low-income communities.

A study published this year in Ecological Economics analyzed the socio-demographics of people living near drilling and fracking operations in four high-fracking states: Colorado, Oklahoma, Pennsylvania, and Texas.

They don’t just face disproportionate exposure to toxic emissions, leaks, and spills. They also have fewer resources — like health insurance, medical services, or income security — that would help them protect their health.

But you don’t have to live near wells and pipelines to be at risk. We all face harm from fracking’s impact on the climate.

So-called “natural gas” is 85-95 percent methane, a short-lived but highly potent greenhouse gas. Over its first 20 years in the atmosphere, methane traps about 86 times more heat than carbon dioxide. That 20-year timeframe matters: Scientists tell us that’s about the time we have to slash our greenhouse gas emissions and begin pulling carbon out of the atmosphere.

Unfortunately, as the research we collected finds, methane leakage rates from drilling and fracking operations have “greatly exceed” earlier estimates. A 2018 analysis of methane leaks across the U.S. found leakage rates to be 60 percent higher than reported by the EPA. A 2019 study in southwestern Pennsylvania found some gas emissions to have been underreported by a factor of five.

Overall, how bad is fracking? The Compendium states that “public health risks from unconventional gas and oil extraction are real, the range of adverse environmental impacts wide, and the negative economic consequences considerable.”

It concludes: “Our examination of the peer-reviewed medical, public health, biological, earth sciences, and engineering literature uncovered no evidence that fracking can be practiced in a manner that does not threaten human health.”

The logical conclusion is that, for health, justice, and a livable world, the time to stop using fracked gas is now.

Barbara Gottlieb is the Director for Environment & Health at Physicians for Social Responsibility, www.psr.org. She participated in the pre-publication review of the Compendium. This op-ed was distributed by OtherWords.org.

2018 03 14: Compendium 5: ‘The Harms of Fracking’: New Report Details Increased Risks of Asthma, Birth Defects and Cancer. Dr. Sandra Steingraber: “Fracking is the worst thing I’ve ever seen.” Dr. Pouné Saberi: “There is a code of silence….” Workers rarely report injuries or hazards, for fear of losing their jobs.

Anthony Ingraffea, PhD, Dwight C. Baum Professor of Engineering, Cornell University, said,“In 2008, when New York State first declared a moratorium on fracking, only six peer-reviewed papers on the health and environmental impacts had been published. Now there are more than 400, and the vast majority show a clear and present danger.

What’s more, many problems are unfixable by regulations of any kind.