Time for Conservatives to make the environment their issue too by David Krayden, November 12th 2015, National Observer

The Sakens would like to sit down with these titans of the energy industry and discuss some form of compensation. They have so far received nothing but bottled water: 9.5 million litres a year, to be sure, but not exactly equal to the loss of clean water on a farm that has been owned and worked by the Saken family since 1929.

Now the Sakens have appealed to legal counsel to shake the Alberta Energy Regulator out of its apparent stupor and bring the companies to the bargaining table. There has been no effort, as yet, by Alberta’s NDP government to initiate that action.

In Alberta, the energy industry is apparently regarded as such an exalted entity that it need not fear being compelled to do more than the absolute minimum — even in the supposedly brave new world of the eco-friendly and big business–skeptical NDP.

For conservatives, who are quick to laud the work ethic of the family farm and the pluck and initiative of the rugged individual, this gross neglect should not do.

Yet, in the print media, there has been nary an editorial nor an op-ed piece suggesting that an injustice has occurred. I think the farm-friendly conservatives of Alberta can do better and imagine some response — dare we say, even some protest — that addresses what many must see as a fundamental lack of morality and justice.

Aside from justice, is there even sense in slavishly supporting the fossil fuel industry just because Canada has always done so, at least for much of the past 100 years? There are few issues that anger conservatives more than government subsidies going to causes they think unworthy. But how about G20 countries (including Canada) subsidizing the energy industry to the tune of $452 billion (U.S.) per year? 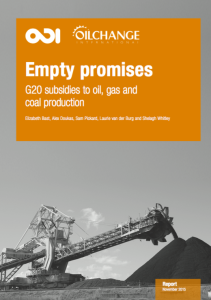 This accusation comes from Oil Change International. They are hardly an unbiased player in the global warming debate, but the charge is not without foundation. That taxpayers should be financially assisting an industry worth trillions is not only without reason, it is contrary to every good fiscal conservative principle.

It reminds me of a notion that was briefly floated during the Chrétien years — that taxpayers should subsidize hockey teams in order to sweeten the incentive to remain in Canadian cities.

On no other issue during my almost 10 years of employment with the House of Commons did I see more angry e-mails from outraged Canadians. But is the energy subsidy any different from forking over money to fat-cat hockey clubs?

AER’s ADR: Enforcer or Fraud? Sakens want AER to force talks on their Edson dairy farm’s water contaminated by Suncor, Bonavista (that AER knew about since 2009 but covered-up)

2015 10 27: What Happens When an Insolvent Energy Company Fails to Pay its Surface Rent to a Landowner? Part 2

These numbers certainly suggest section 36 is an overworked provision, and that the failure by energy companies to pay their rent is not uncommon. Alberta taxpayers have paid out nearly $10 million to cover rent owed by the oil & gas industry to landowners over the past 10 years.