USGS study: methane common in groundwater of New York’s Southern Tier by Marie Cusick, December 17, 2013, State Impact Pennsylvania
Naturally-occurring methane is common in groundwater supplies throughout south-central New York, according to a study published today by the U.S. Geological Survey. … USGS hydrologist and lead author Paul Heisig says it was important to establish an understanding of naturally occurring methane concentrations while New York’s moratorium on hydraulic fracturing is still in place. “It seemed a prudent thing to do, because of the experience in Pennsylvania,” he says. “They would have benefited to have baseline reference data.”

So-called “tap water torches” and videos of people lighting their drinking water on fire have been widely circulated since the shale gas drilling boom began. The industry correctly points out that methane is naturally occurring [all methane is naturally occurring, what is not, are leaking or badly constructed wellbores and high pressure hydraulic fracturing forcing hydrocarbons to release. “Naturally” tight, unconventional formations do not “naturally” release methane, companies must frac and shatter them, to force the methane to let go.], however gas development is also known to cause methane to migrate into drinking water supplies.
…
The USGS study was primarily funded by the New York State Energy Research and Development Authority. [Emphasis added]

Study by the USGS: More than 10 mg/l methane in 15 percent of upstate New York State water wells by Associated Press, December 17, 2013
The U.S. Geological Survey study found that 15 percent of groundwater samples from 66 household wells across south-central New York contained naturally occurring methane at levels high enough to warrant monitoring or remediation, even though none of the water wells was within a mile of [but are surrounded by extensive] existing or abandoned natural gas wells. Methane is an odorless, colorless gas which can be explosive in high concentration. USGS scientist Paul Heisig said the levels in four of the wells were so high that water coming out of a tap could potentially be lit with a match, or be an explosive risk. Heisig added that the study found significant differences between water wells located in valleys and upland areas: nearly 30 percent of groundwater samples from valleys tested at or above levels that suggest cause for concern, but none of the samples from upland wells did. Heisig said the research should help policy makers and the public understand the conditions in the region. The testing was done in the summer of 2012 and the study area included about 1,800 square miles in parts of Broome, Tioga, Chemung, Chenango, and Delaware counties that have Marcellus Shale gas resources that the industry wants to drill.

New York has had a moratorium since 2008 on the “fracking” drilling method that’s used to tap shale gas deposits. Gov. Andrew Cuomo said Monday that he might decide whether to allow limited fracking by the end of 2014, but that the decision will be based on science. Heisig said his team didn’t specifically try to link the gas in water wells to the Marcellus formation, but rather focused on documenting the naturally occurring variations in water wells in the region. In a nearby region of northeastern Pennsylvania, Duke University scientists found that some water wells located within a mile of new gas drilling wells had higher levels of methane, compared to those farther away. State officials, meanwhile, found that some methane contamination in the area of Dimock…was caused by nearby drilling.

Occurrence of Methane in Groundwater of South-Central New York State, 2012—Systematic Evaluation of a Glaciated Region by Hydrogeologic Setting by United States Geological Survey (USGS), 2013
Wells within a 1-mile radius of any known current or former gas well in the study area or along the Pennsylvania border were excluded from consideration for sampling to avoid potential effects from current or historic gas wells (fig. 4). …

Measurable methane in the sampled groundwater was commonplace; concentrations greater than or equal to 0.001 mg/L were present in 78 percent of samples (fig. 5). … Ethane was present in 14 samples at concentrations of 0.0001 to 0.047 mg/L, and those same samples had methane concentrations from 0.2 to 55 mg/L.

In samples with methane concentration of 0.5 mg/L or greater…hydrogen sulfide was detected in all but one sample. … Methane was predominantly of thermogenic origin in valley-setting samples and predominantly of microbial origin (carbon dioxide reduction) in upland-setting samples. … Valleys and uplands.—The strong association of methane (and more saline groundwater) from wells in valley settings is consistent with historical information (Williams, 2010) and with the results of Molofsky and others (2011, 2013) and Warner and others (2012). Methane at concentrations of concern [greater than or equal to 10 mg/L; U.S. Office of Surface Mining recommendation in Eltschlager and others (2001)] were exclusively from wells within the valley settings; of the 17 samples with at least 1 mg/L of methane, all but one were from a valley setting. …

Significance of Findings
… From a practical perspective, this understanding of methane occurrence and origin provides water-resource managers and the public with a frame of reference for initial evaluation of future questions related to stray gas, particularly if high-volume hydraulic fracturing development of shale gas proceeds in New York State. … Reports of elevated methane in valley wells that are confined and completed in bedrock would not be unusual given the sampling results from this study (2012). The difference in methane origin between upland and valley areas, as indicated by the isotopic characterization presented here, may represent a useful tool for putting methane occurrence in context.
…
Groundwater methane occurrence and origins identified in this study are consistent with regional results for New York and northeast Pennsylvania. …

[Summary of some results:

Summary and Conclusions
A 66-well survey of methane occurrence in groundwater was carried out during the summer of 2012 to address a lack of information for south-central New York. The study area encompasses about 1,810 square miles and includes all or part of Broome, Tioga, Chemung, Chenango, and Delaware Counties. Water wells within a 1-mile radius of known gas wells (active, exploratory, or abandoned) were excluded from the survey.

Methane is Common in Groundwater from Valleys in South-Central New York State Press Release by USGS, December 17, 2013
A new USGS study found that 15 percent of groundwater samples from 66 household wells across south-central New York contained methane at levels high enough to warrant monitoring or mitigation.  The wells were tested in June and July of 2012 to provide baseline [decades too late for “baseline”] data on methane concentrations in groundwater. The study area includes about 2000 square miles and is considered favorable for Marcellus Shale gas resources.  None of the water wells tested was located within a mile of existing natural gas wells.

“This study provides baseline water-quality data that will be useful for decision makers, regulators, industry, and stakeholders concerned about water quality,” said USGS scientist Paul Heisig, who led the study. … “Our testing shows that methane is common in some groundwater wells at the present time. Sampling also shows that methane is not random in groundwater across the landscape,” said Heisig. [Emphasis added] 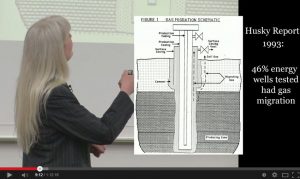 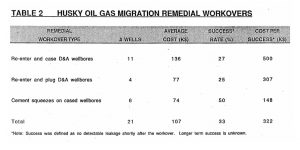 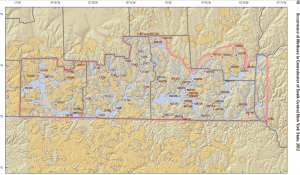 Figure 4 from Page 10 of the USG study. Large yellow circles are energy wells, including many unplugged or abandoned, with one mile buffers make up much of the map. Details and cumulative impacts for these excluded from the study!)