W.Va. DEP fines Michels for drilling mud pollution by San Francisco Chronicle, February 13, 2013
A pipeline construction company that West Virginia regulators say polluted a stream must pay a $3,800 fine and stop storing mud from gas drilling operations at its site near Lumberton. … The DEP says inspectors discovered last fall that Michels had put drilling mud from an Antero Resources operation into an unlined waste pit. … Michels admits no wrongdoing in the agreement but says it will comply with state law going forward. [Emphasis added]

America’s Radioactive Secret: Oil & gas wells produce nearly a trillion gallons of toxic waste a year in America. It could be making workers sick and contaminating communities (in Canada too). “Us bringing this stuff to the surface is like letting out the devil … It is just madness.” 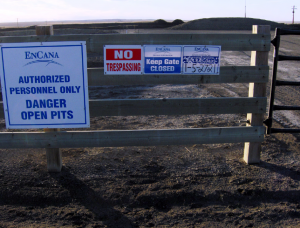 Some of Encana’s many unlined waste pits near Rosebud Alberta. When done with them, Encana covered them up.